The Continued Adventures of Mary and Joseph

During the month of Advent, children have been taking turns to bring Mary and Joseph home for the night to give them shelter and look after them as they travel to Bethlehem. With the Christmas holidays upon us, catch up on what Mary and Joseph have been doing whilst we have been away from school.

After a long and hard-working half term, Mary and Joseph fancied a sweet treat to help them through the rest of their long journey. Big decision time though - which cupcake would they choose? 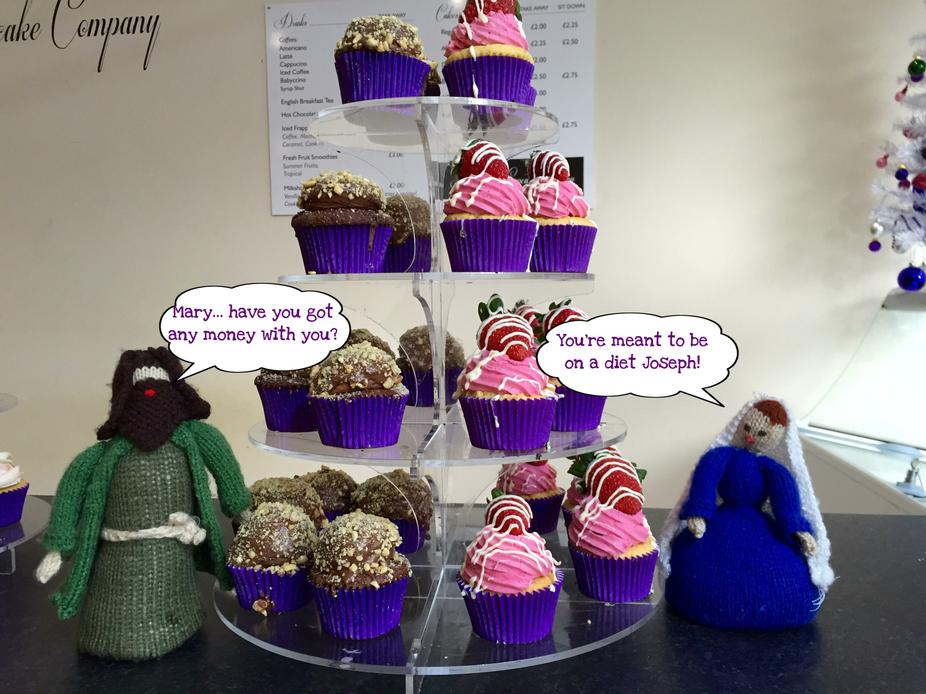 Today, Mary and Joseph visited the Anglican cathedral in town. On their way in, they noticed a crib in which there was a very familiar looking couple with their baby... 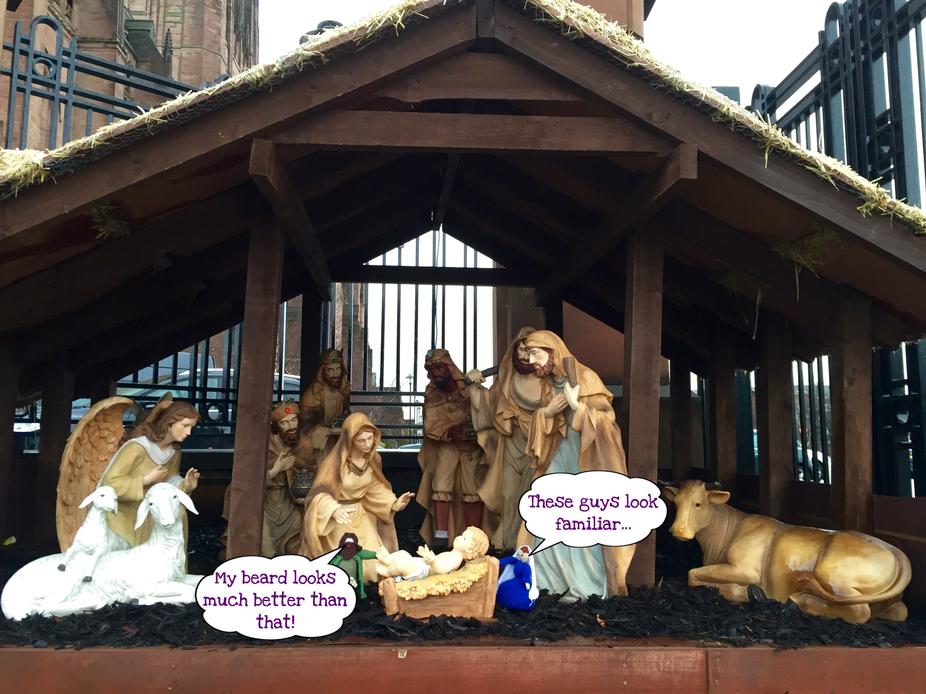 It's been a very busy time for Mary and Joseph recently, so they decided to chill out and watch a few movies today. There was one in particular that they both really enjoyed. 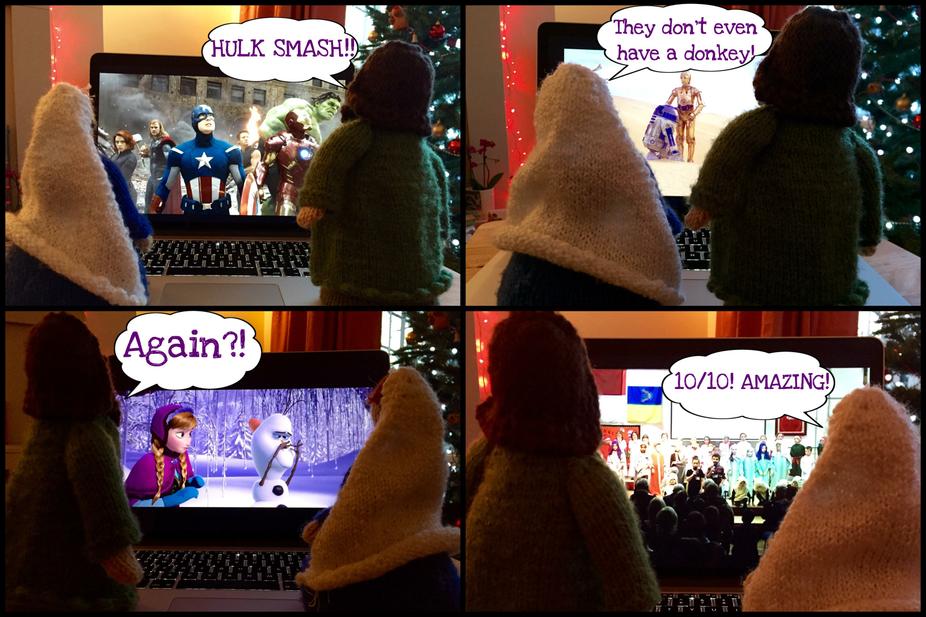 Today, Mary and Joseph helped me to decorate the Christmas tree. We didn't use quite as much tinsel or baubles as in class, but they still think that it looked lovely in the end. 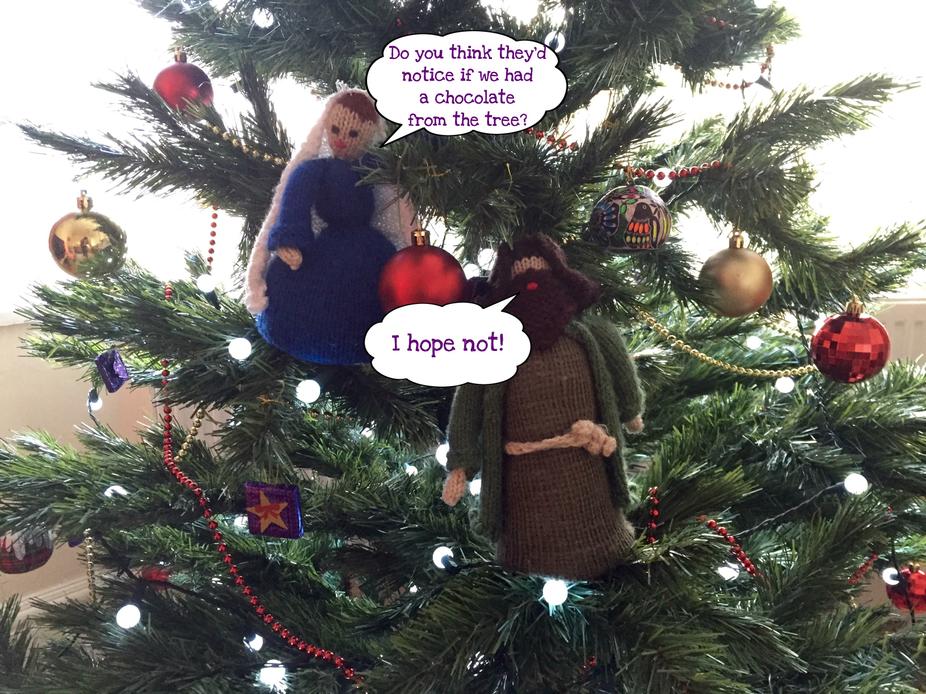 Today Mary and Joseph went to visit Mrs Baird to drop off some presents. Whilst they were there, Mary spotted a reindeer and wanted to swap their donkey for it, but Joseph wasn't convinced. 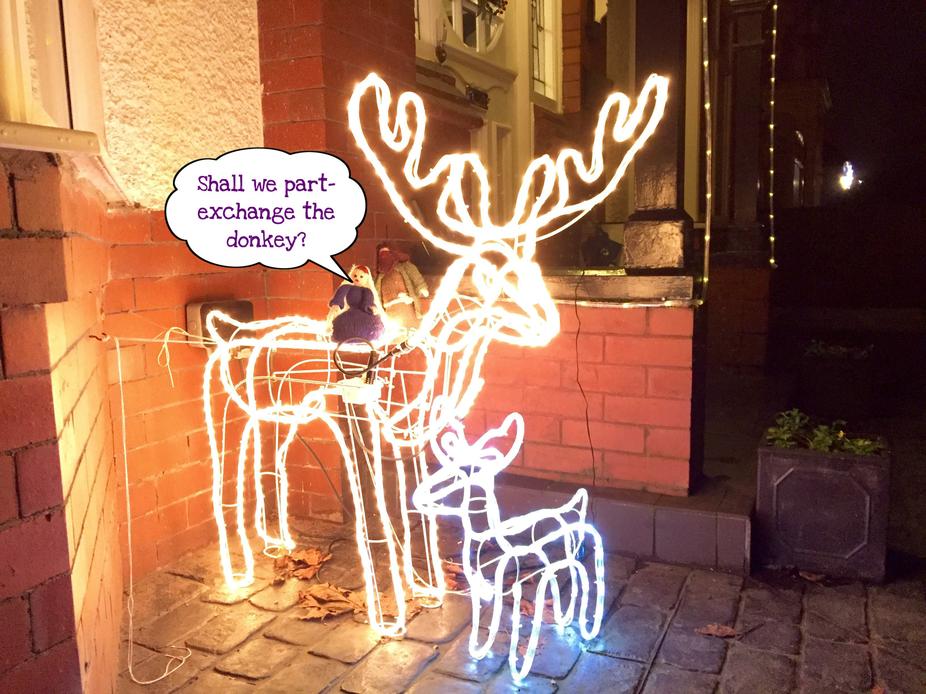 Some of you may be aware that today is Christmas Eve. Mary and Joseph didn't want to be left out by Father Christmas so they left out some treats for him - A glass of milk, some chocolates, a macaron, a cake and of course - a mince pie. 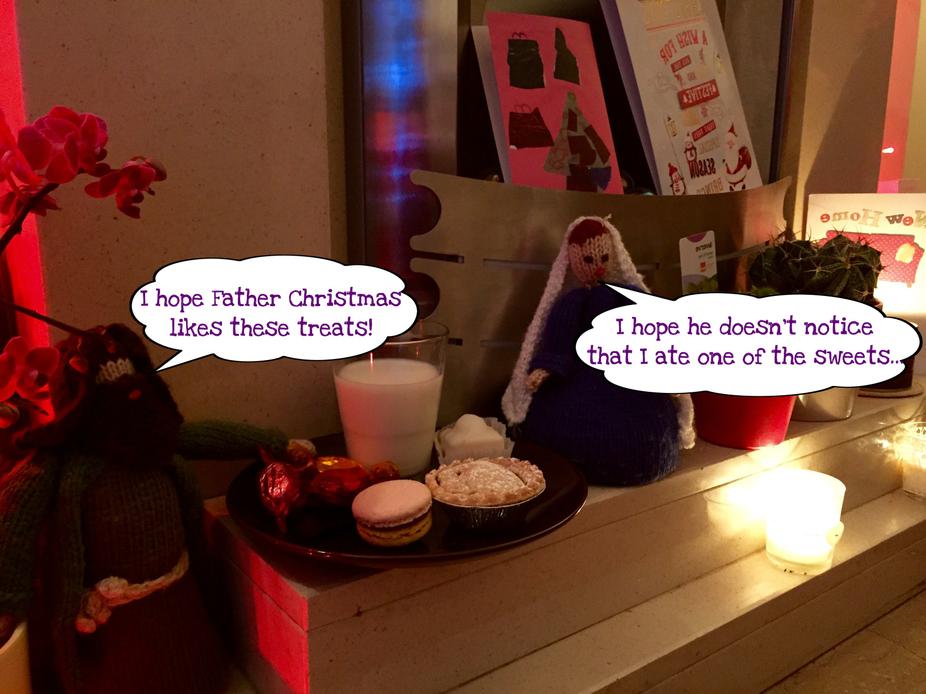 Today was of course Christmas day and it was a very special day for our favourite Mary and Joseph. Amongst all the celebrating and opening presents they completely forgot to eat their Christmas dinner! Not a problem though - there was plenty left over for them. 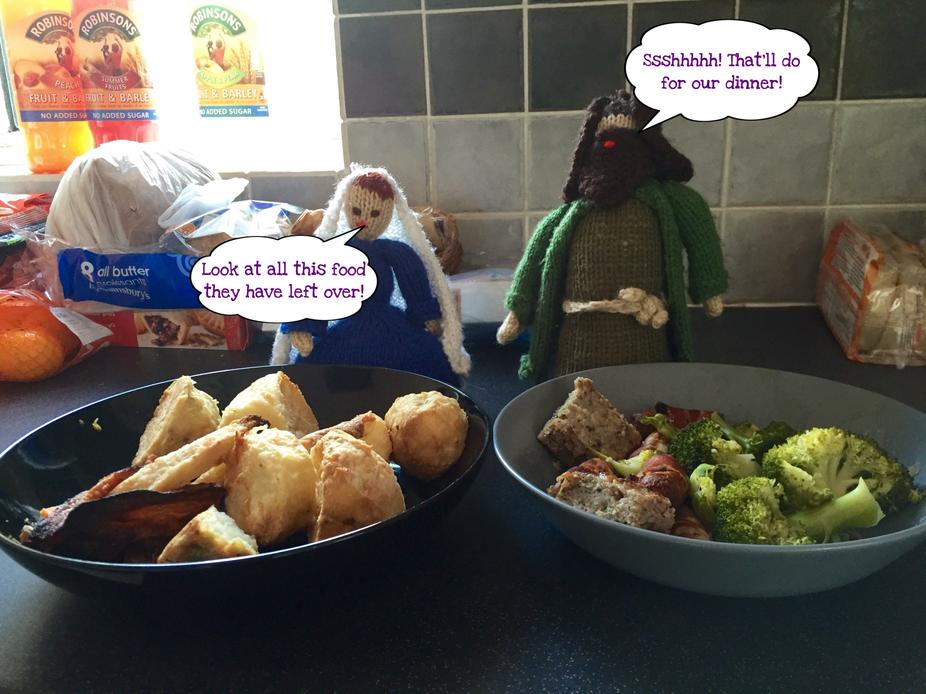 Mary and Joseph were very tired today after eating all that they did yesterday. They had planned another day of watching movies but then something very exciting happened... it began to snow! It's very hot in Bethlehem, so they decided to go outside and cool off with a snowball fight. 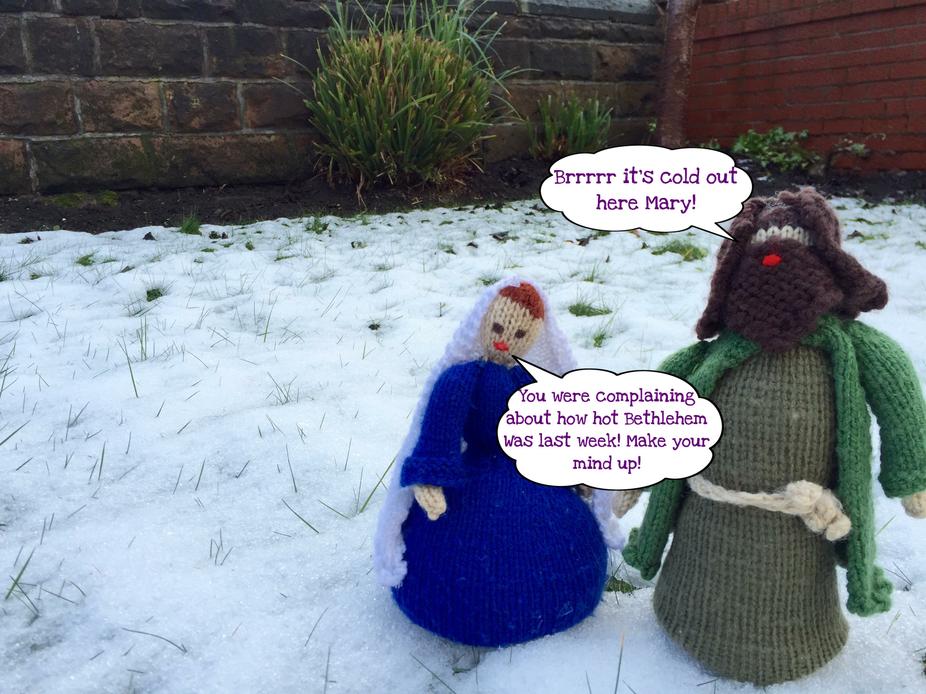 This morning there was still some snow left in the garden that hadn't quite melted yet... but what could be done with it? There was only one possibility - Mary and Joseph decided to build a snowman! He didn't look that much like Olaf though. 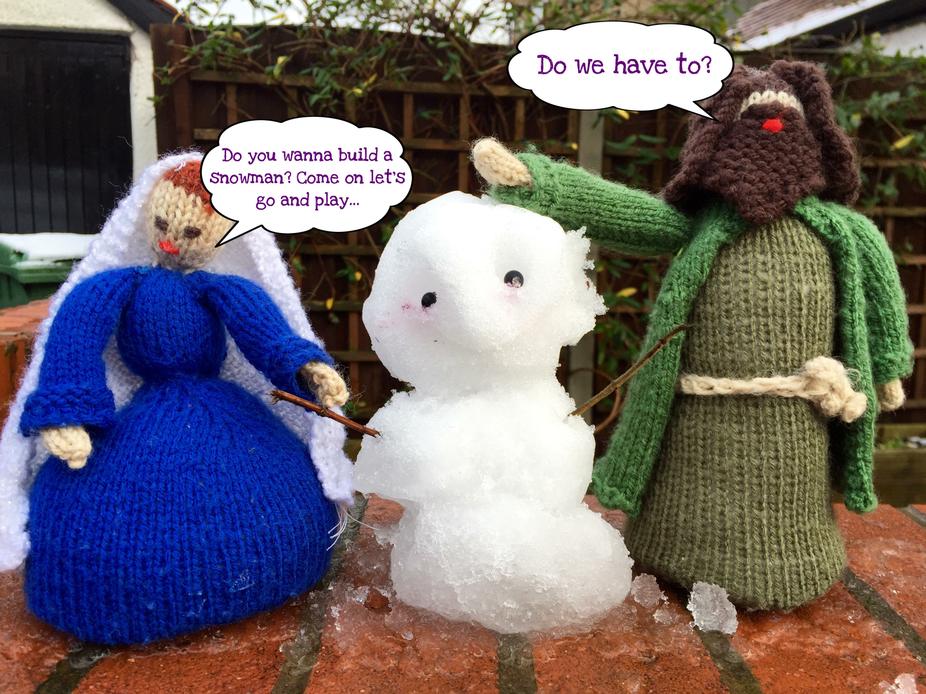 To finish off a lovely weekend, this evening Mary and Joseph went out for dinner. They enjoyed a feast of Italian style tapas which helped to warm them up on this freezing cold day. 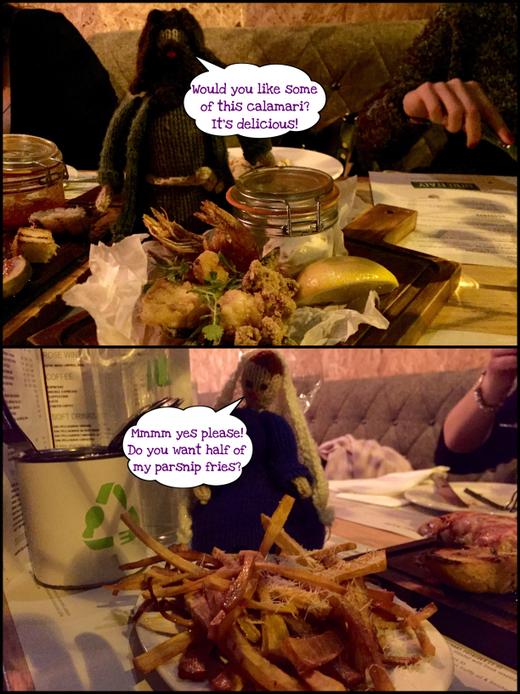 Mary and Joseph wanted to go to the cinema today so they headed into town. On the way they felt a bit peckish so popped into a restaurant - they decided on a very large falafel and halloumi burger with salad and fries. (Going to the cinema can be hungry work!) 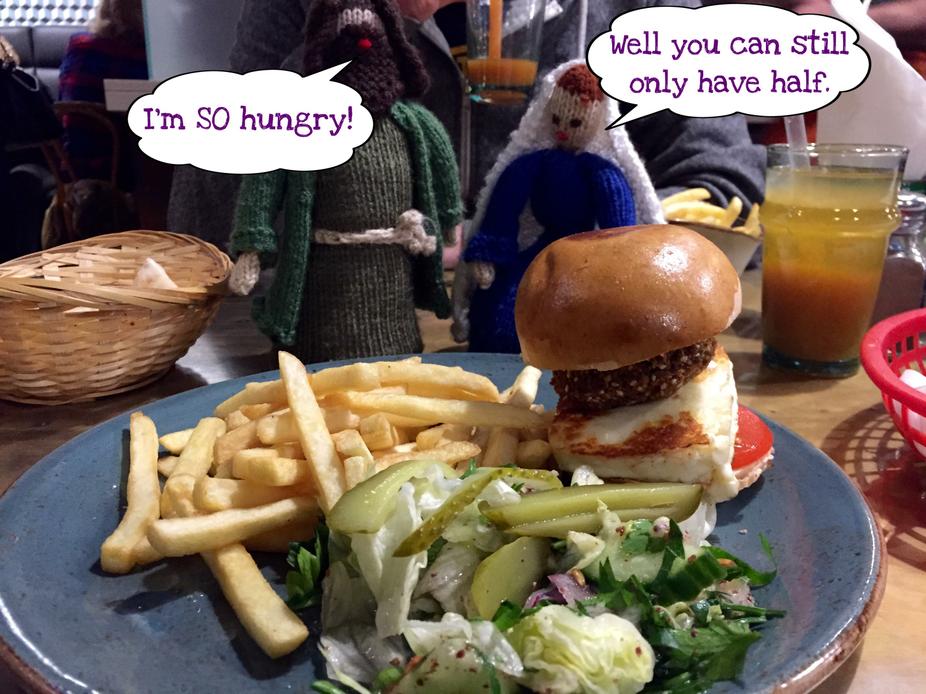 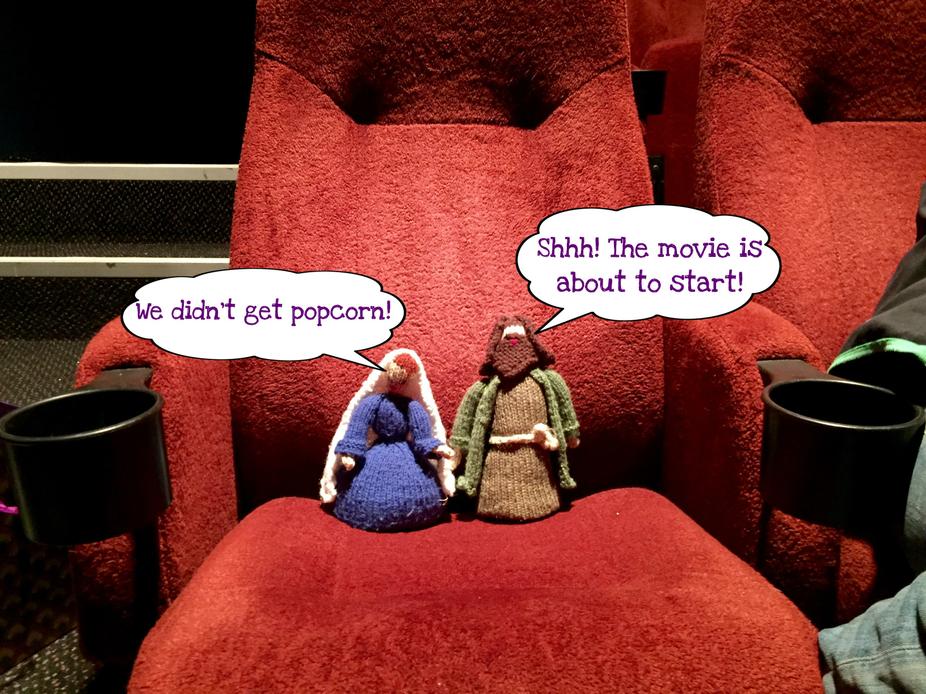 Mary and Joseph treated themselves to a mini Mexican feast today. Tacos filled with halloumi, pork, beef and fried fish, with fries, salsa and quesadillas stuffed with chorizo and cheese. All delicious... although after eating so much recently, they weren't really that hungry. 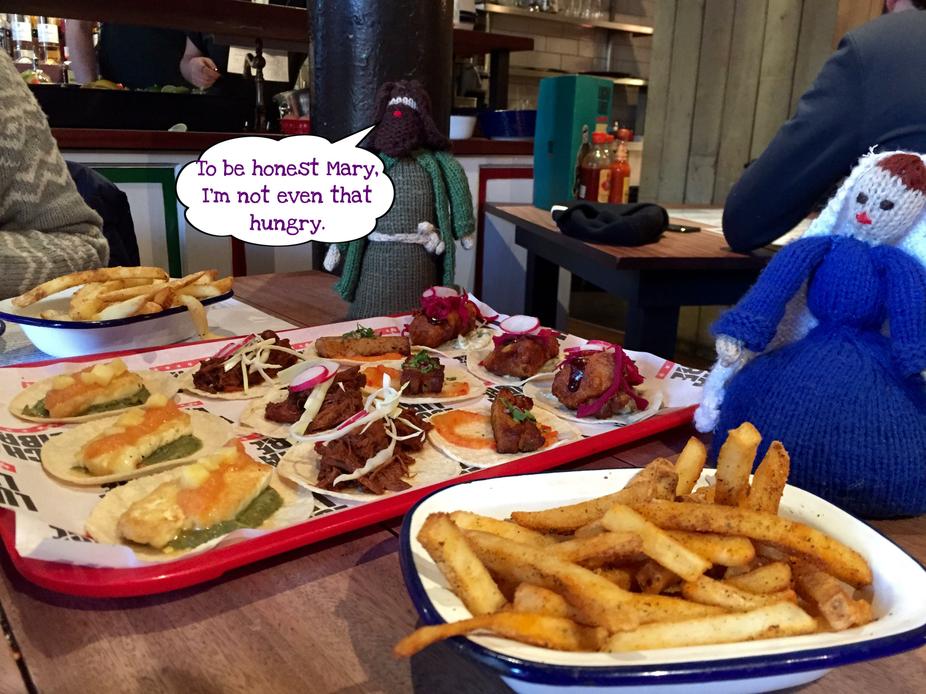 It's New Year's Eve today so Mary and Joseph wanted to celebrate the end of 2014 and the beginning of 2015. They played some party games, watched the fireworks and even had a royal party guest. 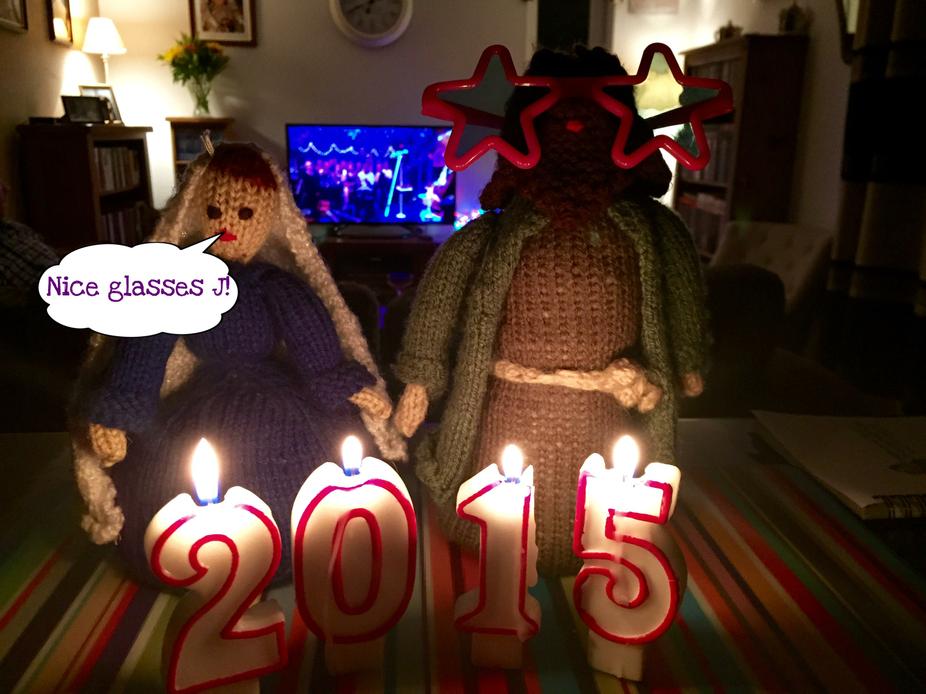 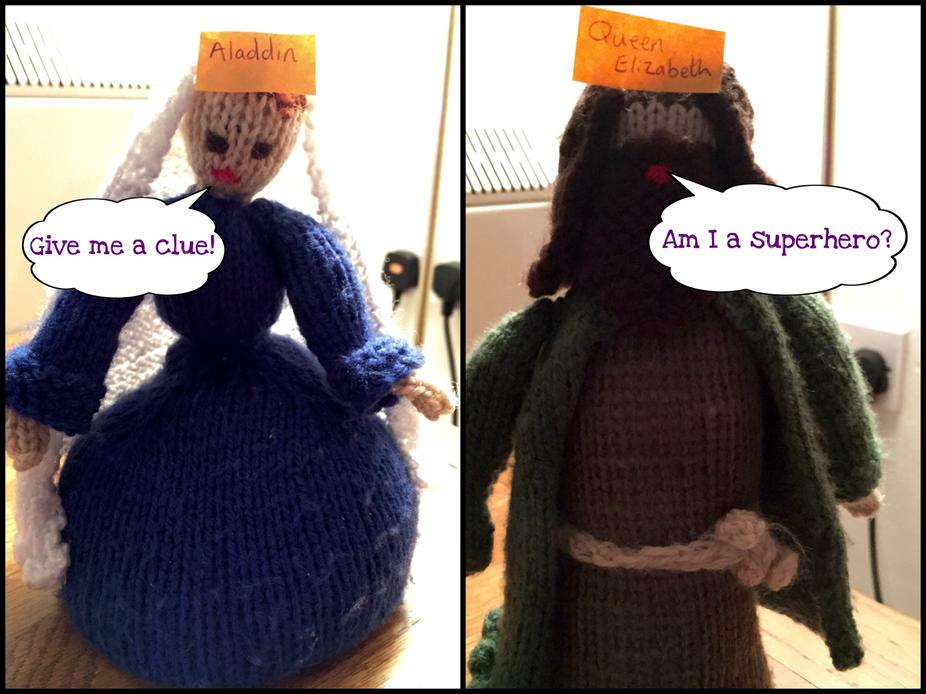 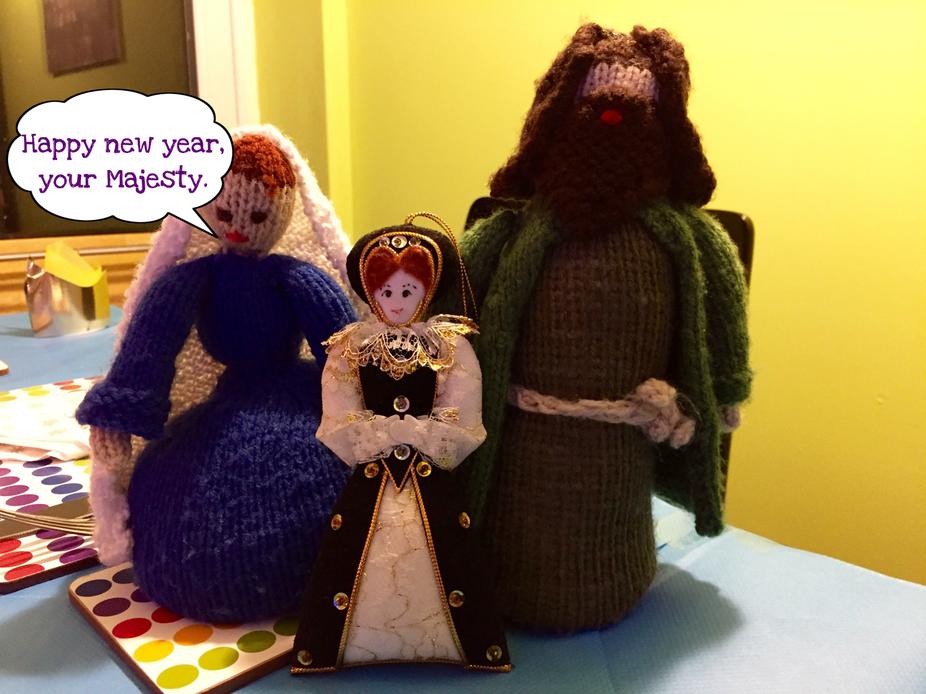 Mary and Joseph went to a friend's birthday dinner today. They were feeling homesick so had a lovely Lebanese style meal of lamb shawarma, couscous and flatbread. After dinner, having watched so many nature documentaries over the holidays, Joseph saw his friend's pet cat and was feeling brave... 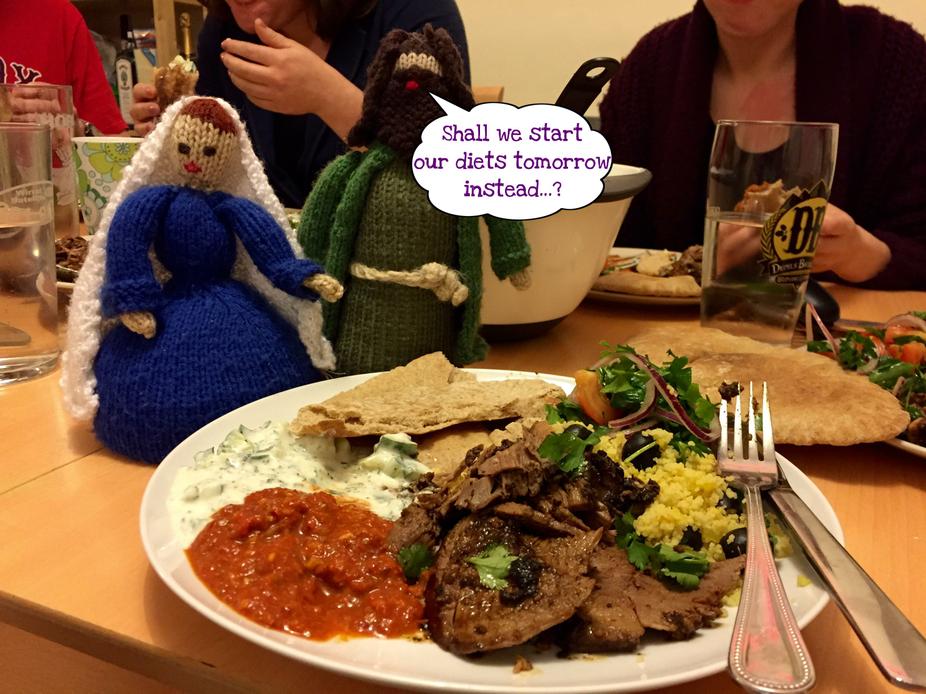 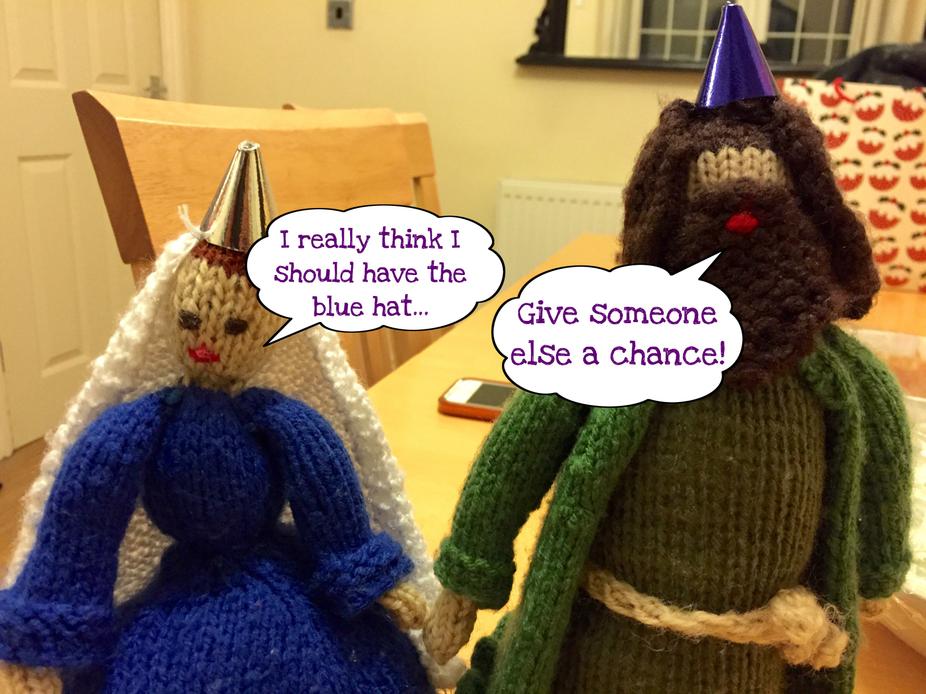 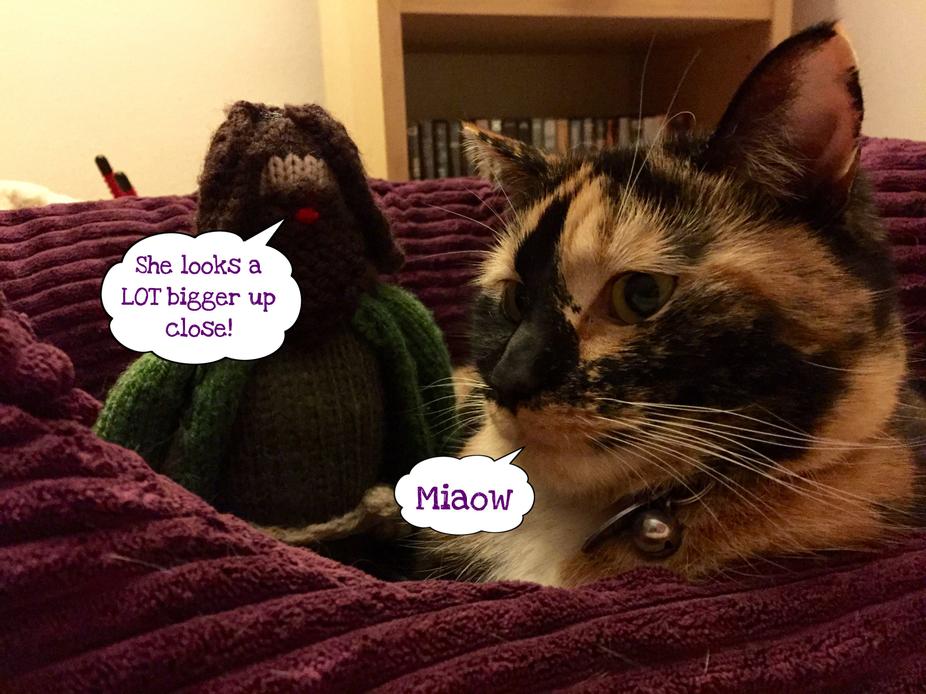 Mary and Joseph bumped into another friend today - one which they hadn't seen since Christmas. She brought good news; there's still a whole weekend of holiday left to go. 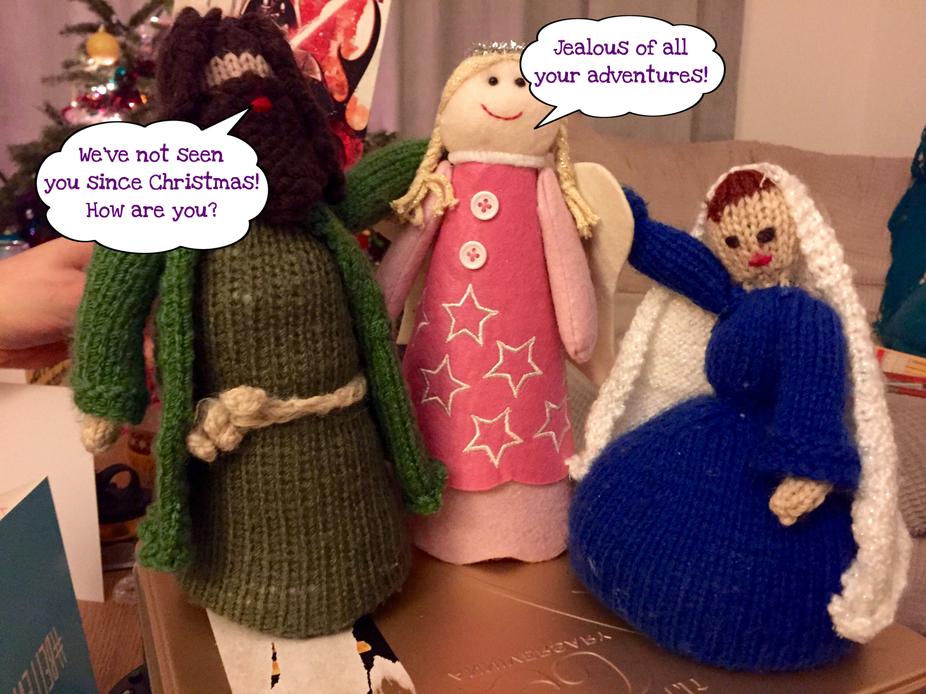 After such a busy few weeks, Mary and Joseph decided to relax together today. They also made a very delicious pizza topped with chorizo and blue cheese as they didn't want the holidays to end without one more memorable meal. 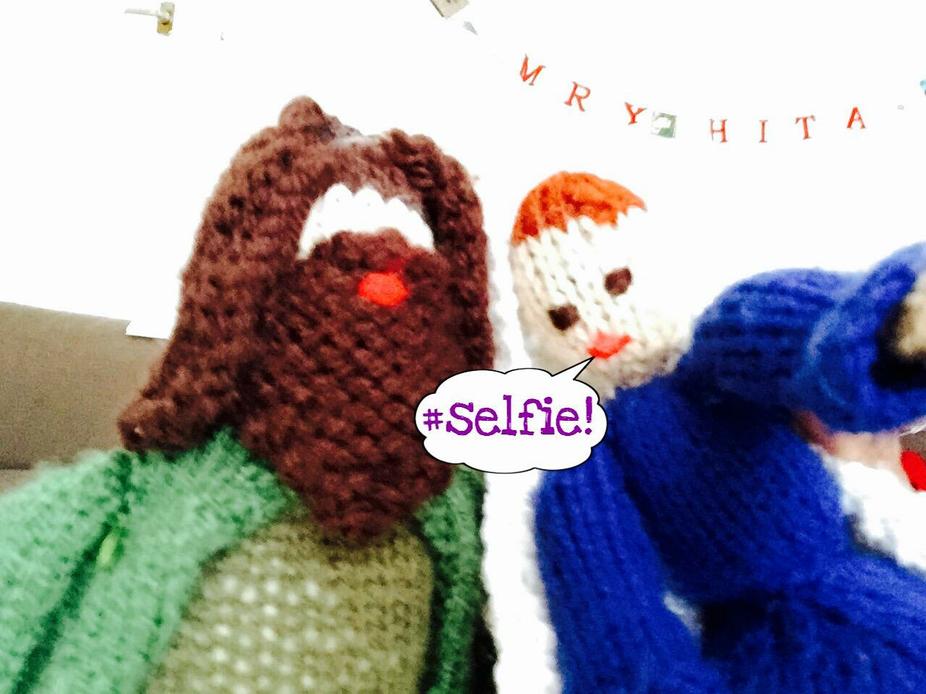 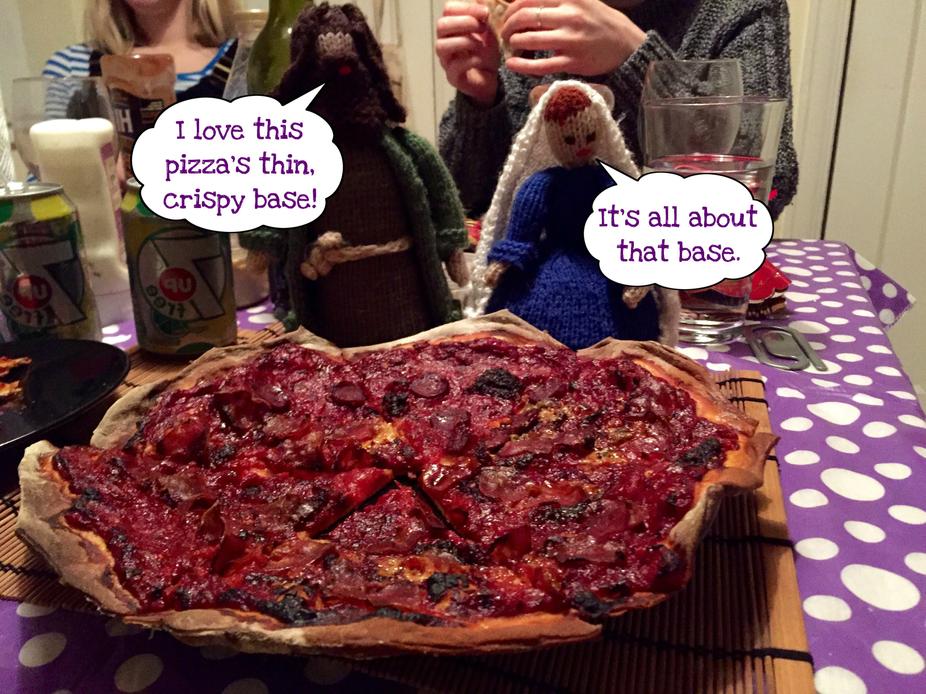 Today is the last day of the Christmas holidays and the end of Mary and Joseph's long journey. They've been packing their bags ready to go back to work, wishing for one more journey. They would like to thank everyone for reading their continued adventures. 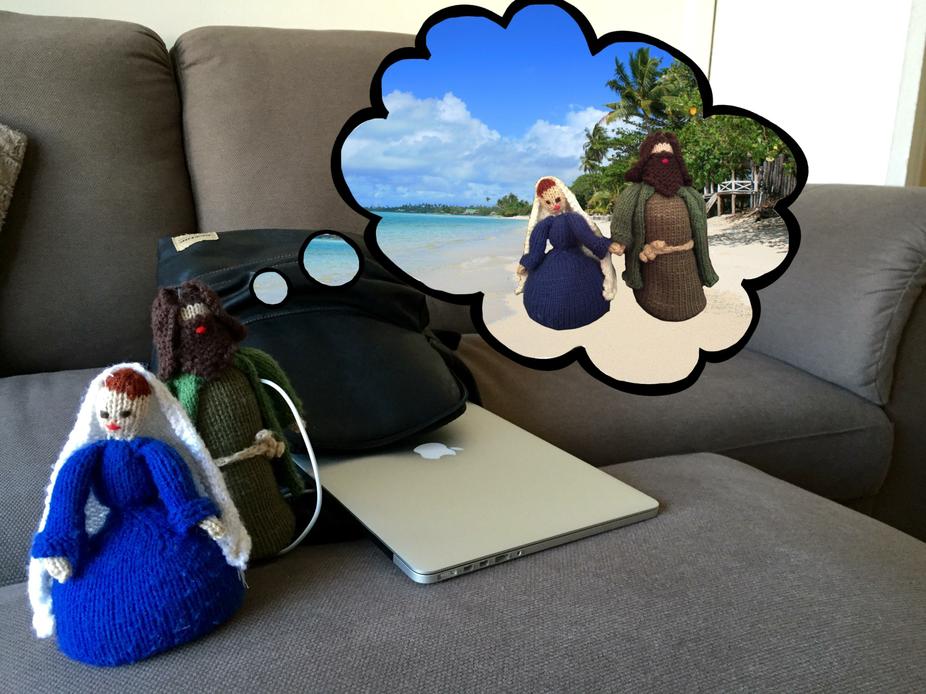 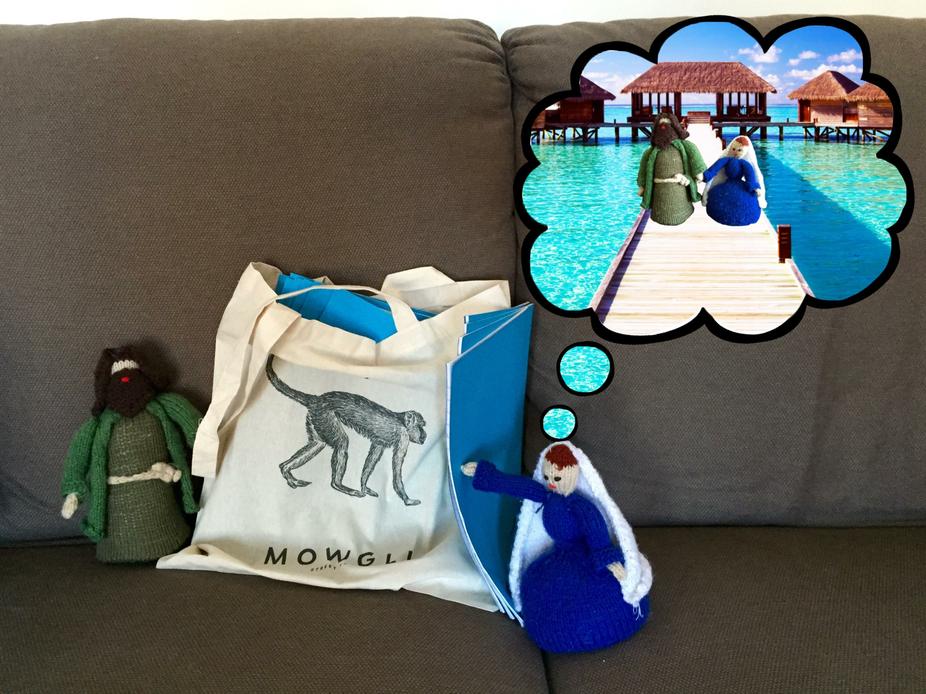 Recently, it's been a busy time for our favourite knitted friends, but they are finally on their way back home. They flew in style along with 400 passengers, 6 dogs, 4 cats, a parrot and half a tonne of fresh salmon. They travelled at speeds of 670mph at one point (with a very strong tailwind) and up to 39,000ft (about 7 miles high) where the temperature was -60C. A big thank you to Captain Ghorbal for looking after them during this final leg of their journey. 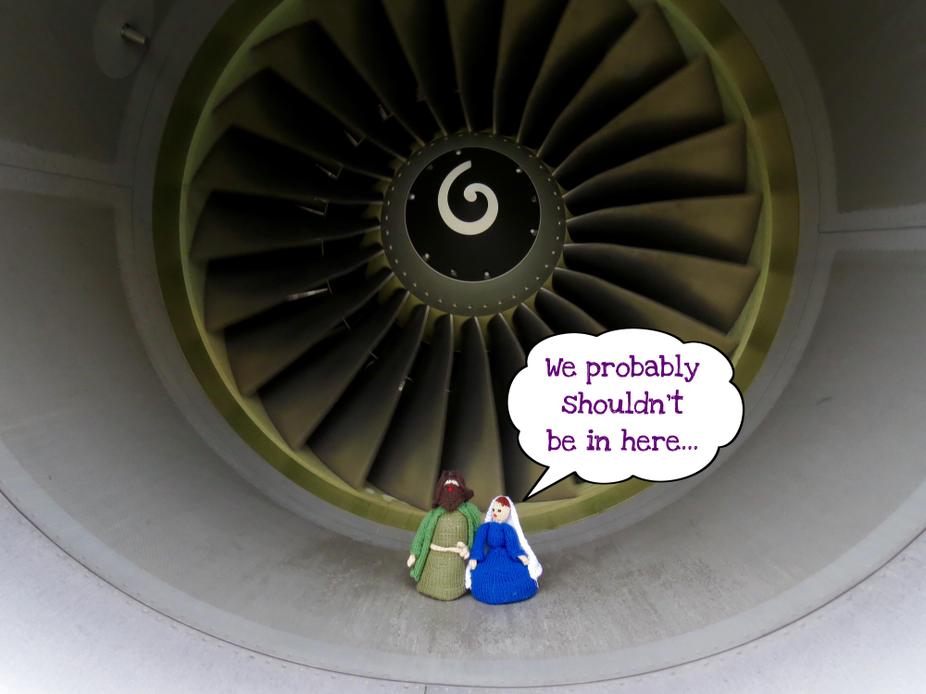 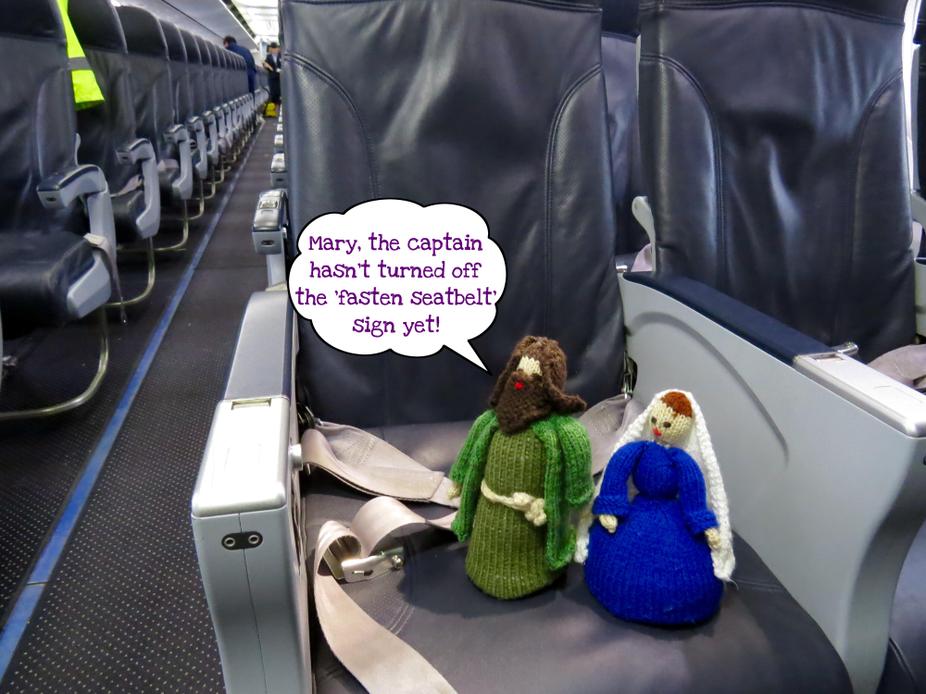 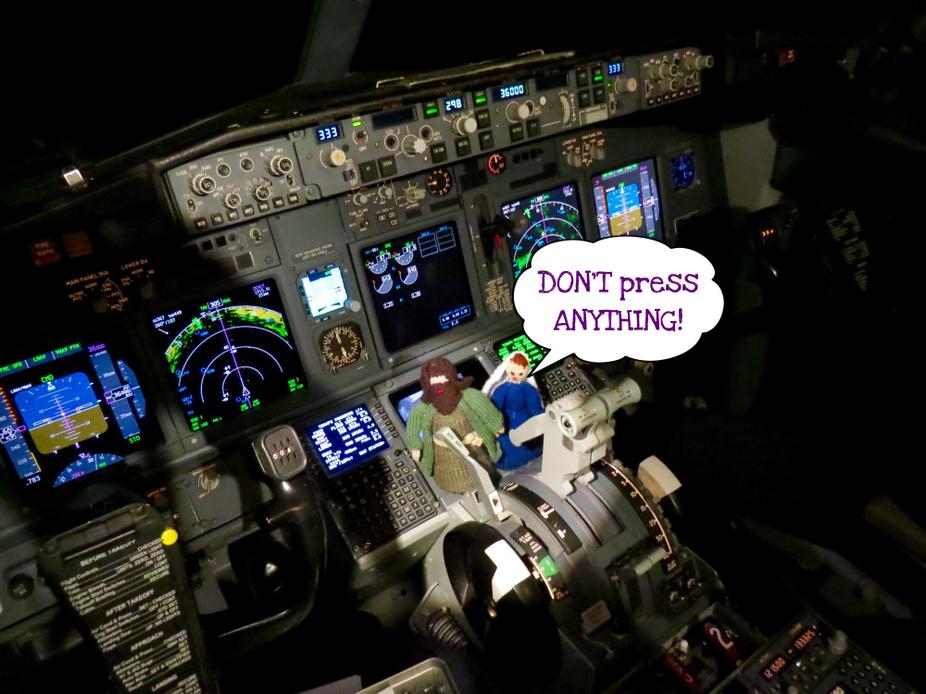 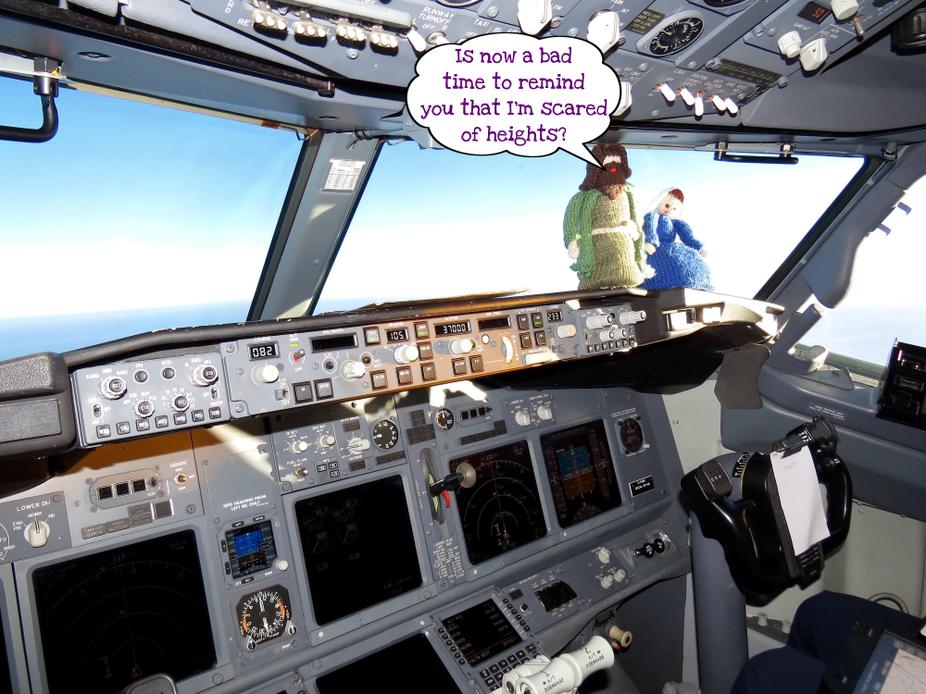