During Advent, we took turns to bring home Mary & Joseph and look after them for the night. Over the holidays, their journey will continue and you can see what they've been up to below. 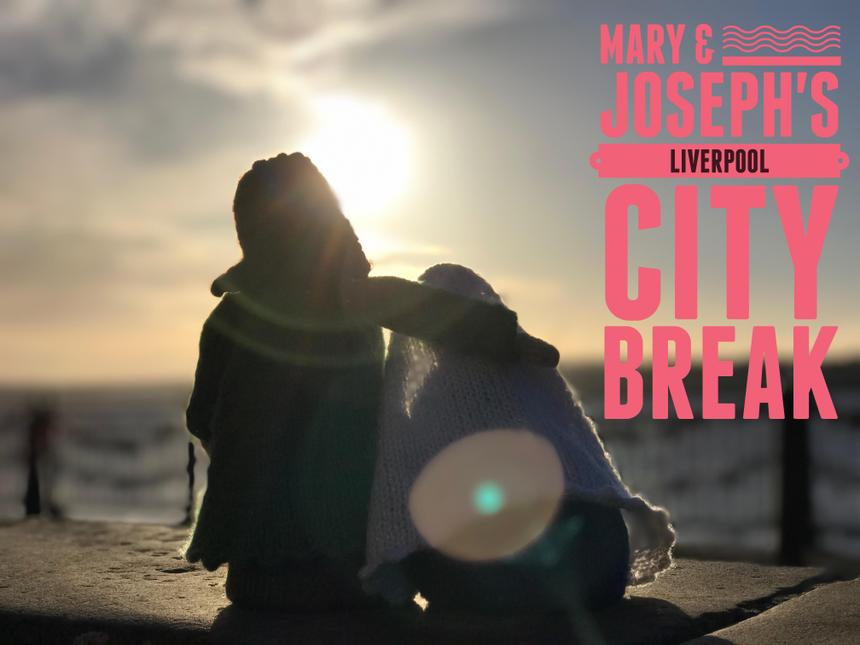 Mary and Joseph have had an extremely busy few weeks and tonight they've decided to put their feet up and have a break. They spent the evening watching TV and eating some very delicious pizza. 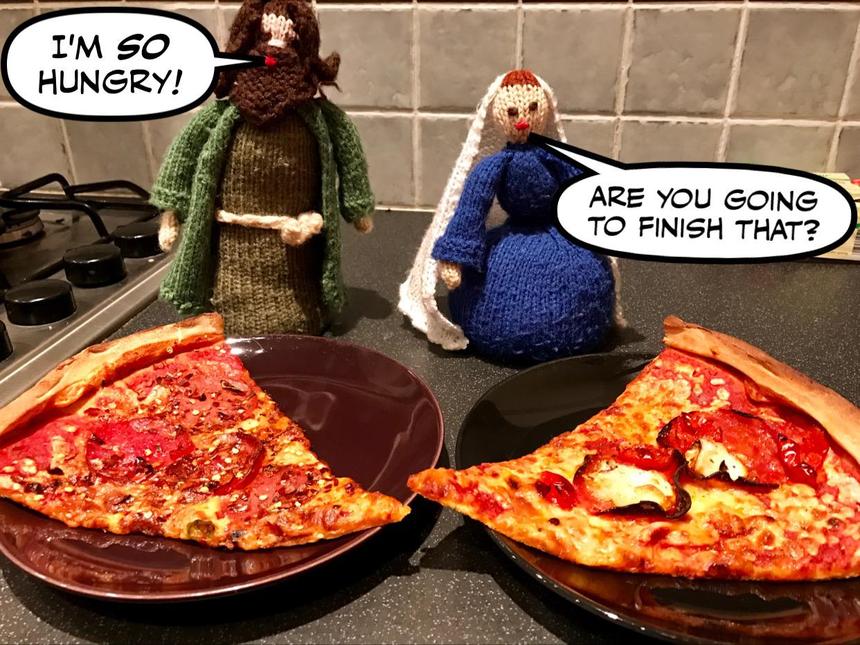 Today was the first day of the holidays so Mary & Joseph decided to treat themselves to a burger and fries, after a long walk around town hunting for Pokémon. They also had a special message for two girls in year 2...

There's not long left before Christmas now. Today Mary and Joseph have been wrapping up the last few presents to go under the Christmas tree. However, Joseph got himself into a bit of a sticky situation. After all the presents were wrapped, they were a bit too tired to cook so decided to go out for a bite to eat.

Christmas Eve! Mary and Joseph are both very excited today because tomorrow is Christmas!  They went for a walk around Calderstones Park and caught a few pokémon along the way, then came home to hang their (suspiciously familiar looking) stocking by the fireplace. 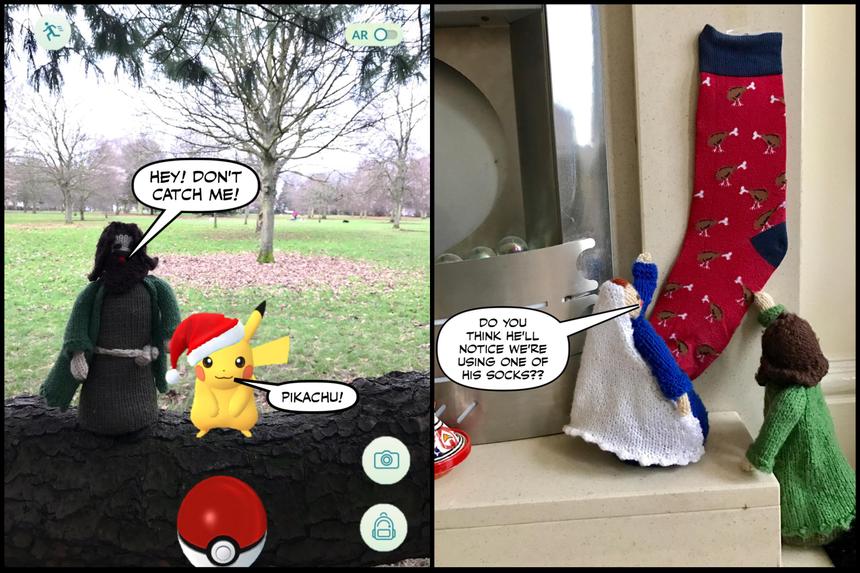 Merry Christmas everyone! Mary and Joseph were very excited to wake up and see what Santa had brought this morning. Once all the presents were opened however, it was time to get into the kitchen and prepare Christmas dinner. Lots of peeling, chopping, boiling, mashing and roasting later, they finally sat down to a delicious feast.

Their favourite presents by far were their matching Alder Hey pyjamas. Have you got your stripes? 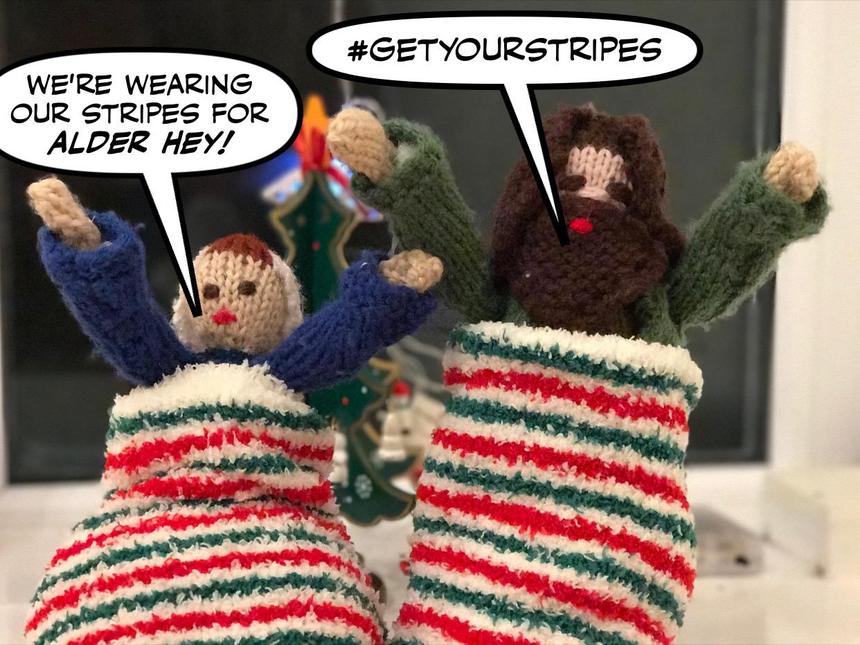 After Christmas Day spent mostly in the kitchen, Mary and Joseph decided to go for a Boxing Day walk today. They walked down to Sefton Park and had wander around, enjoying the fresh air. Joseph got a bit carried away and decided that they should climb a tree... it didn't end very well though! 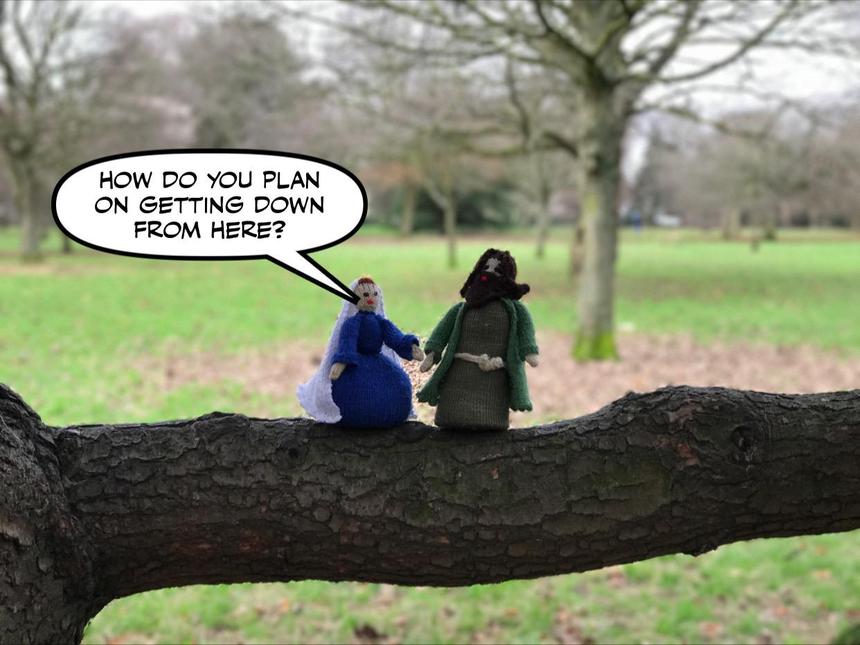 This evening, Mary and Joseph visited Mrs Baird's house to have a ride on her reindeer, before they returned to the North Pole. They liked them so much, that they even thought about swapping their donkey for one (poor Uber!).

Unfortunately, when they were about go back home, they found that the car had a puncture. Both Mary and Joseph tried to fix the puncture but in the end, Mr Hughes just called the AA. 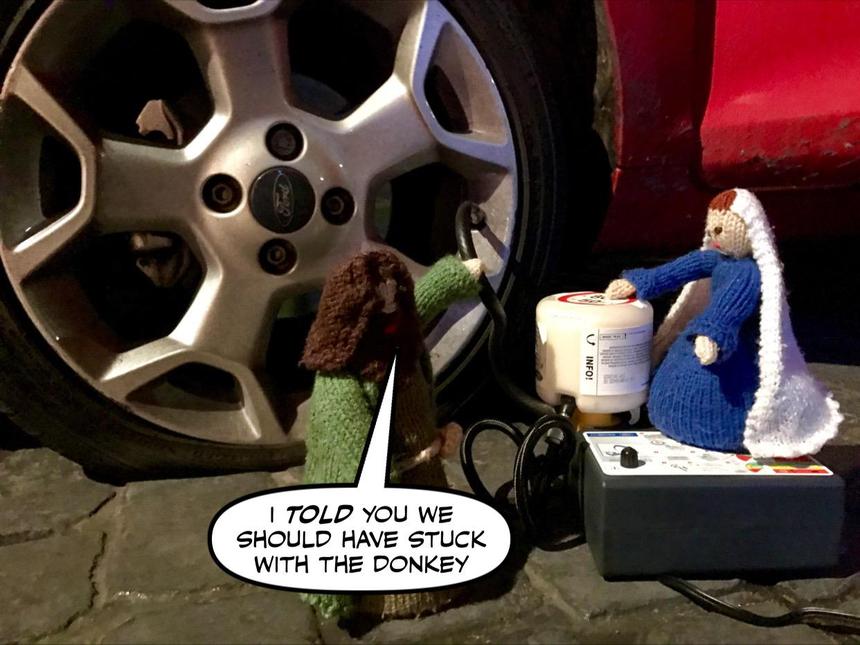 It was time for a Mexican feast today. Mary and Joseph went to their favourite Mexican restaurant for lunch and enjoyed fried chicken and belly pork tacos. Joseph even had some tortilla chips and salsa whilst Mary wasn't looking and nearly spoiled his appetite! 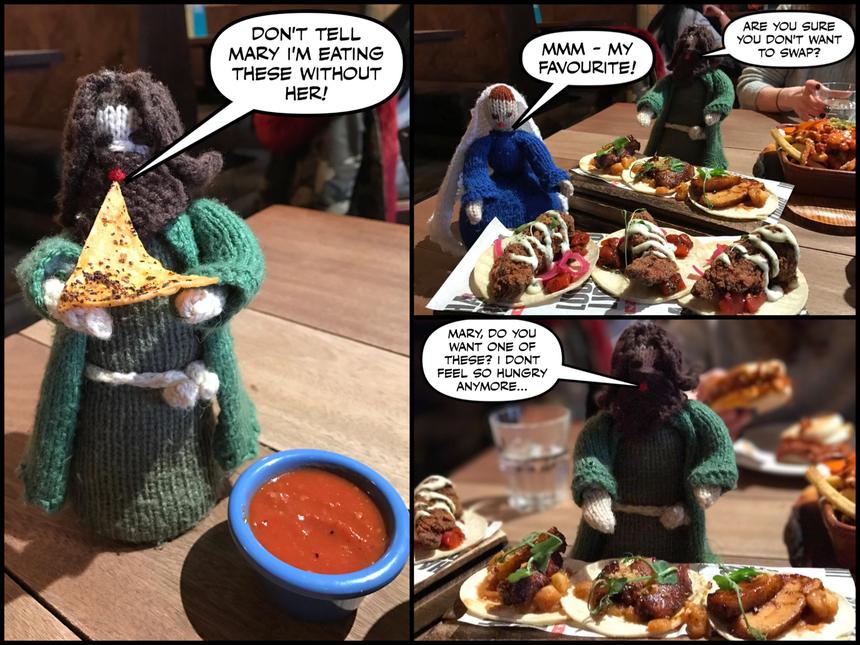 It was absolutely freezing today! Mary and Joseph decided to go for a walk around Sefton Park to see how everything looked, covered in frost and ice (they don't get much of that in Nazareth!). They had a quick play on the swings before wishing two special people a happy birthday.

The day finally came today, for Mary and Joseph to see Star Wars Rogue One and they were both extremely excited. On their way up the stairs to go into the screen and find the perfect seat, they bumped into someone who looked familiar... they were both sure they'd seen her somewhere before...

After the movie finished, Mary and Joseph were feeling uncharacteristically hungry so decided to go out for something to eat for a change. They picked one of their favourite restaurants and enjoyed it all so much that they struggled to share.

Today is New Year's Eve and given that it's been 2000 years since his last once, Joseph decided that it was time for a hair cut. Once his hair was neat and tidy again, he and Mary went for a walk down to Otterspool Prom (secretly, they both just wanted to catch a few more Pokémon).

Mary and Joseph felt like they hadn't been out to eat enough this year, so later that night they went for a very special New Year's Eve dinner. They grudgingly shared some duck, beef and a very delicious chocolate orange fondant for dessert. 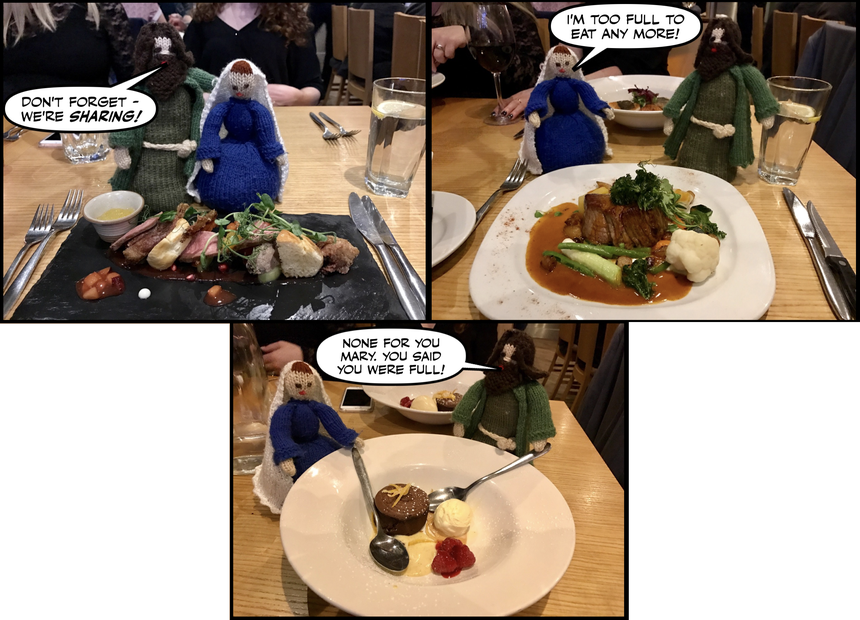 Mary & Joseph decided to make the most of their time in Liverpool and went sightseeing today. They walked around the waterfront down at the docks, visiting all the famous landmarks and enjoying the view. 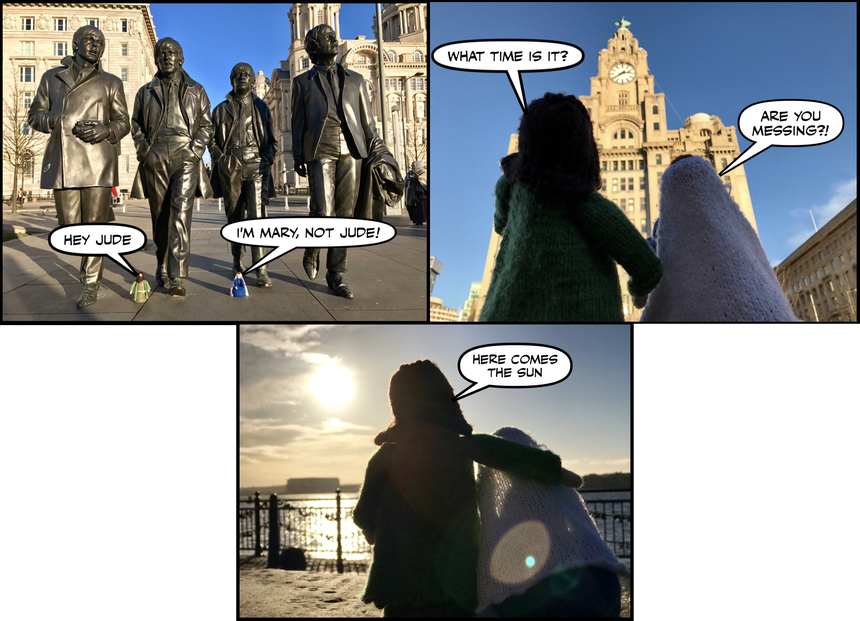 It was extremely cold today, so later on they went inside to find somewhere warm. Unexpectedly, they bumped into... 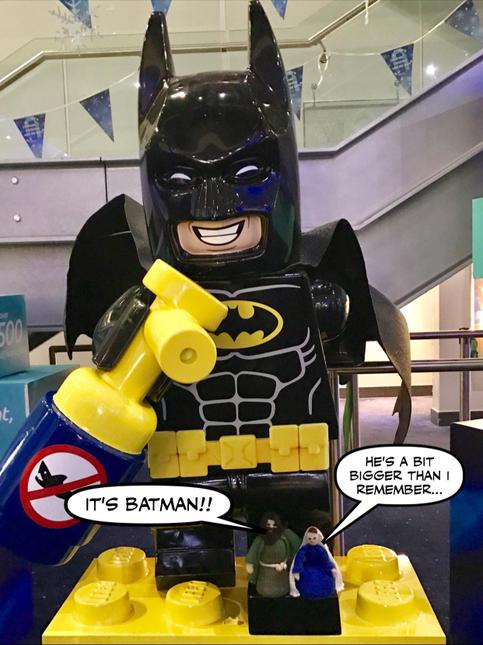 Mary and Joseph only have a few days left in Liverpool, before they have to start on their long journey back to Nazareth. Today they decided to do something that they've not had chance to do much over the holidays and went out for lunch. They had a beautiful meal of octopus, scallops, beetroot, chocolate tart and crème brûlèe. It's been a really tiring day for them! 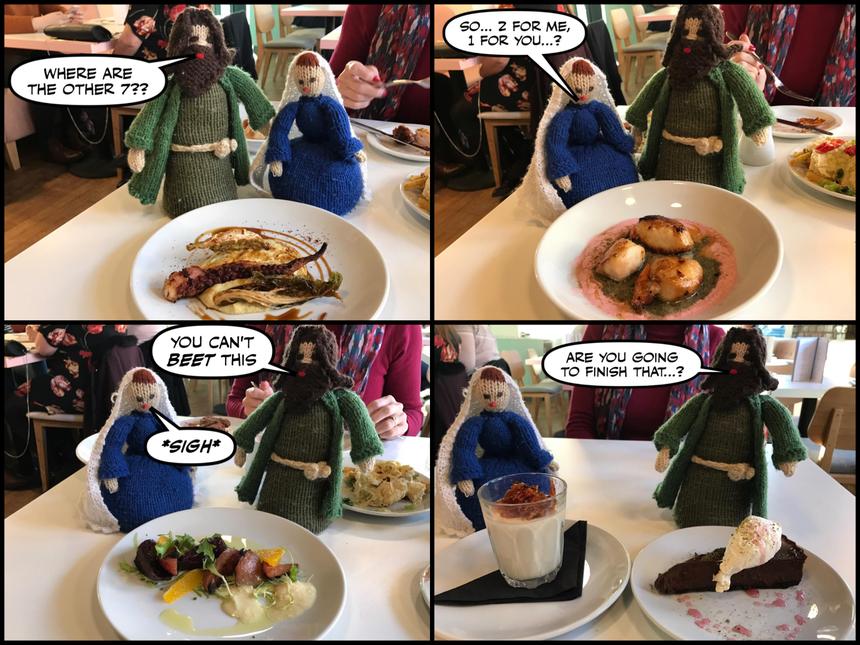 The last day of Mary and Joseph's holiday in Liverpool is finally here. They're both very sad to be going home so spent the day having fun before they had to pack their suitcase. They both hope you've enjoyed reading about their journey and look forwards to hopefully visiting again next Christmas. 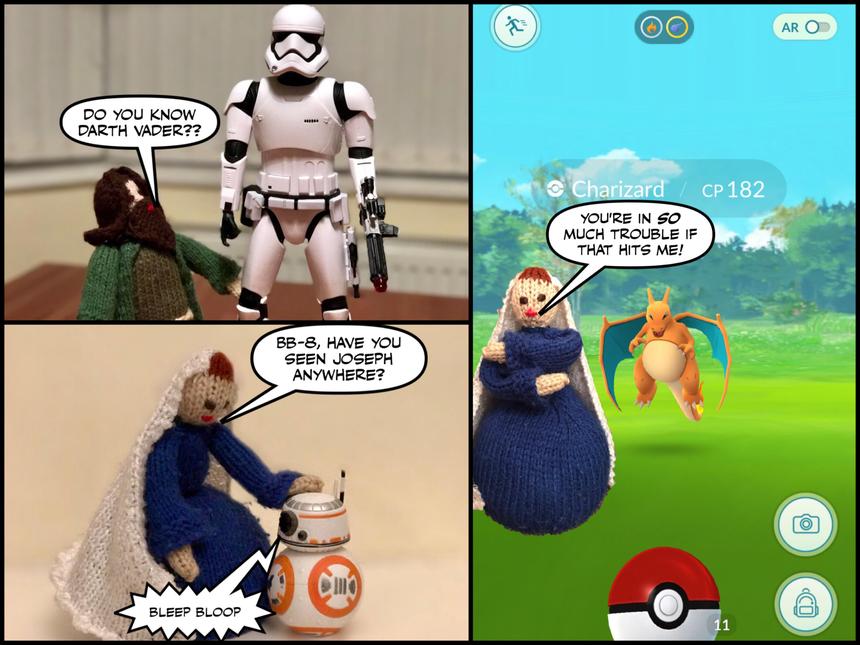 Before they went to bed, they looked through all their holiday photos to remind themselves of all the fun they'd had... and all the amazing food they'd eaten! 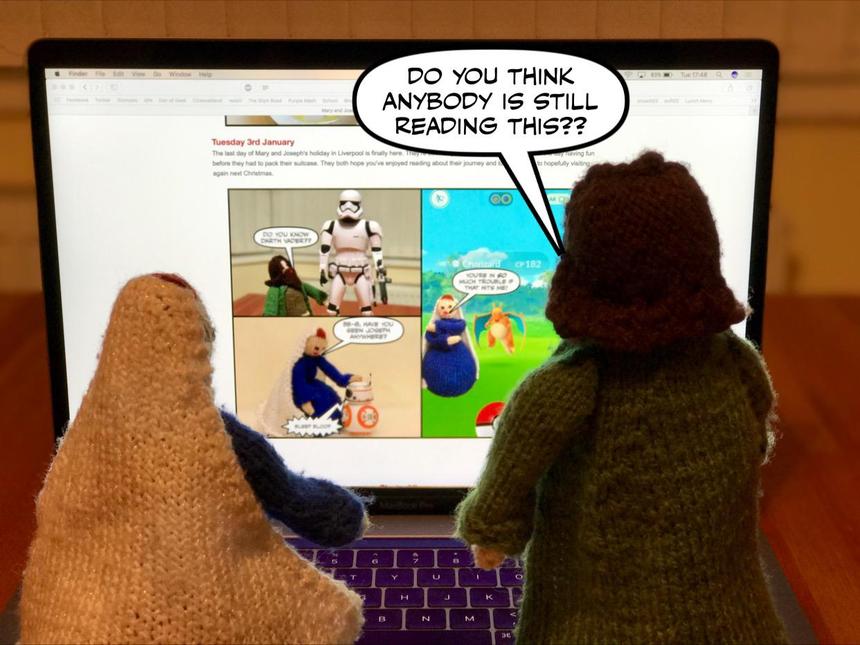 Suitcases packed, checked in online and taxi to the airport booked. Mary and Joseph had one more job to do before they went home - a final birthday message. Once that was done, they headed to the airport and got on the plane home to Nazareth. It's a very long way - good thing they're not riding a donkey home. 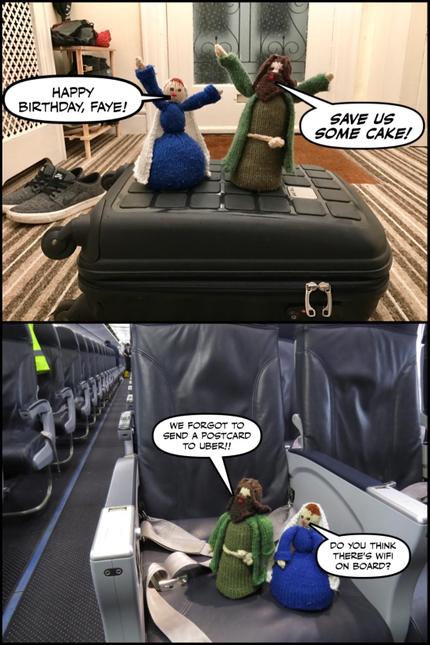