Christmas with Mary and Joseph

For the past few weeks, you've all been taking turns to bring home Mary and Joseph & look after them for the night. Over the holidays, their journey will continue and you can see what they've been up to below.

It has been an extremely long half term and Mary and Joseph are exhausted! They decided to spend the evening with a bit of TV and a snack - some of their favourite cheeses. 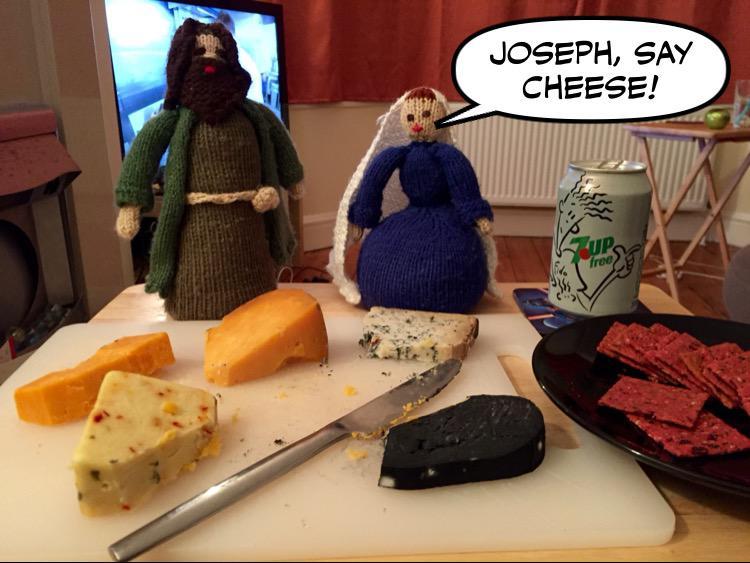 Mary and Joseph have come to London for the weekend and thankfully, they got the train rather than travelling on a donkey. This evening they visited a garden right at the top of a very tall building, which had brilliant views of the whole city. After that they went for some dinner at an Indian restaurant.

Still in London, today Mary and Joseph visited some family. They bought a Christmas present for my godson, but ended up reading it themselves! 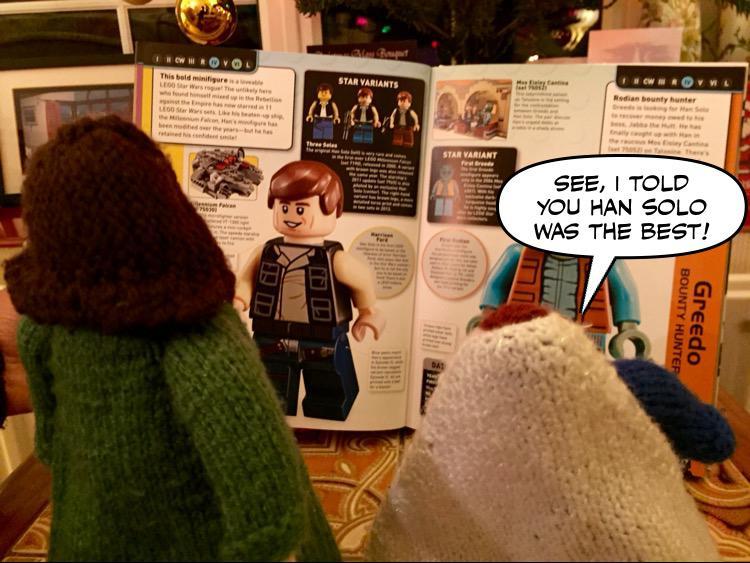 Today was Mary and Joseph's last day in London, before travelling back to Liverpool. As one final treat, they decided to go to a very famous (and gigantic) market called Borough Market. It's well known for its delicious food and coincidentally they were both feeling a little bit hungry... 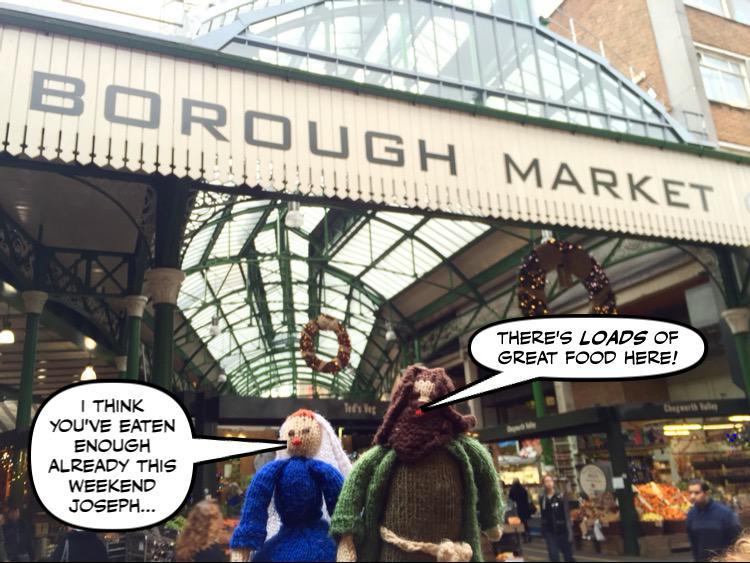 Mary and Joseph have been helping out with the shopping today. With Christmas only a few days away, they needed to help buy all the food for Christmas dinner. When they were in the shops they bumped into someone who looked very familiar - the other Mary! Oh and Joseph got a bit carried away when he saw that they sold Star Wars bags... 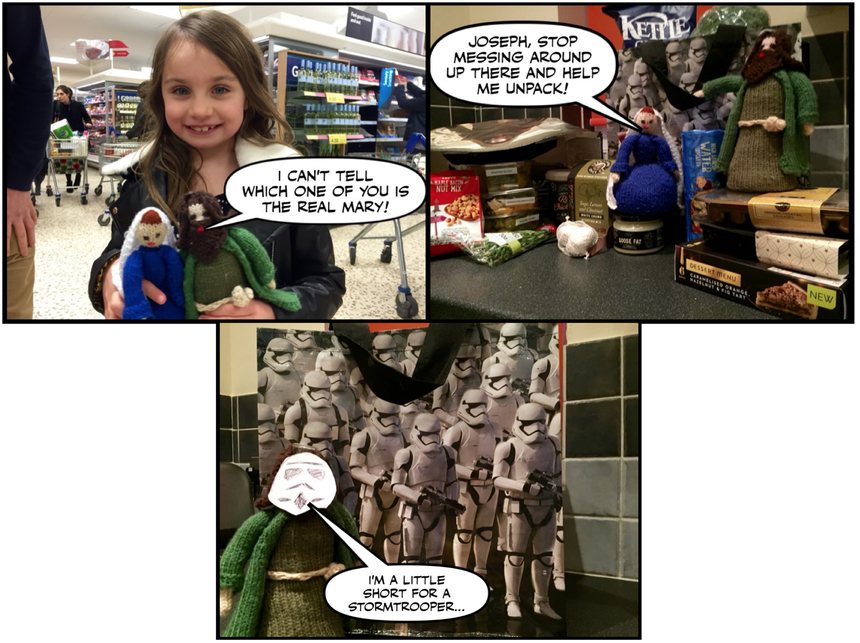 Today in a complete change of character, Mary and Joseph were feeling a bit hungry so went for lunch in one of their favourite restaurants. They had a delicious feast of crispy pork belly in steamed buns and a huge bowl of pork ramen (pork, noodles and vegetables in a tasty broth). For dessert, they had chocolate brownie spring rolls with coconut ice cream and raspberries. After that, they went to the cinema - you might not have heard but there is a new Star Wars movie out and they really wanted to watch it (for the third time). 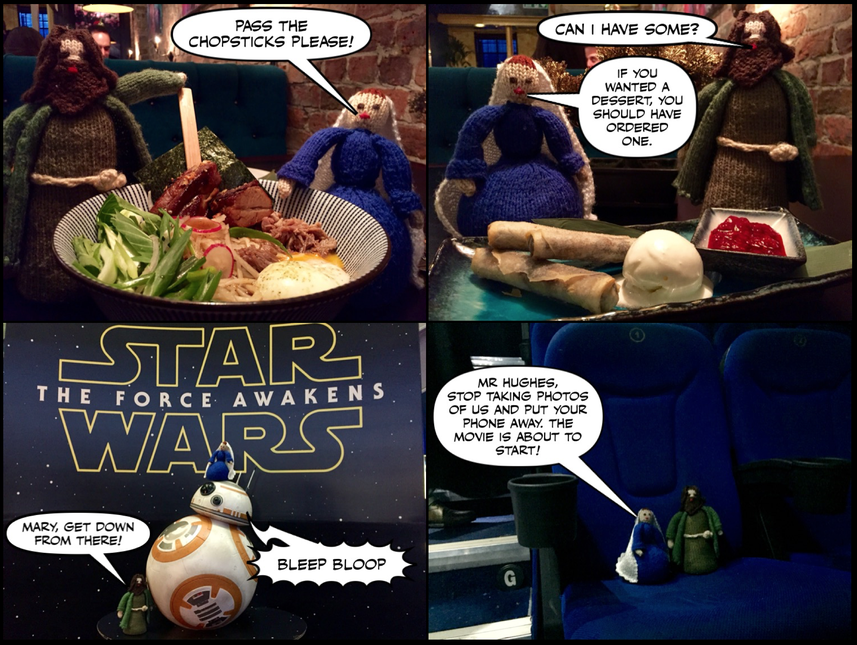 Today is Christmas Eve and Mary and Joseph have spent most of the day relaxing. Whilst at a friend's house this afternoon, they thought that they'd found a replacement for their donkey, who could take them to Bethlehem... but he was far too sleepy. Later this evening, they were a bit naughty and felt all the presents under the tree to try and guess what they were! An early night tonight though because you-know-who is coming soon... ho ho ho!

Today is Christmas (Happy Christmas everyone!) and Mary and Joseph have been helping me in the kitchen all afternoon - there was a lot of work to be done, to cook Christmas dinner. After their hard work, Mary & Joseph sat down to their own little plate of dinner, before relaxing in front of the TV and watching Doctor Who. (Don't tell anyone, but Mary fell asleep half way through watching it!) I hope you've all had a brilliant day and that Father Christmas made his way to your houses last night.

Today is Boxing Day and Mary & Joseph have gone to visit some friends. However before they left, they had a lot of tidying up to do. After piling up all the ripped up wrapping paper to put in the recycling bin, Joseph almost got lost! Luckily Mary found him before he got thrown out with the rubbish. 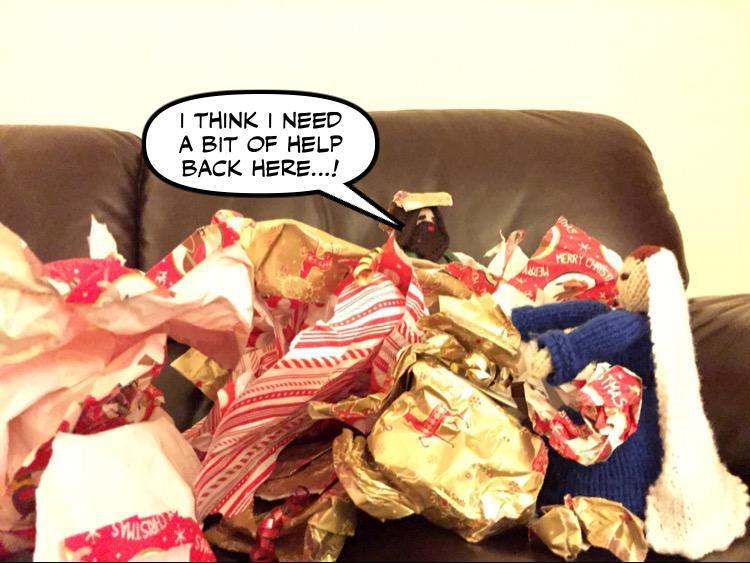 Mary and Joseph had a very long drive home today. It wasn't a very fun journey as it was cold, wet and windy but at least they were in a car and not on a donkey! 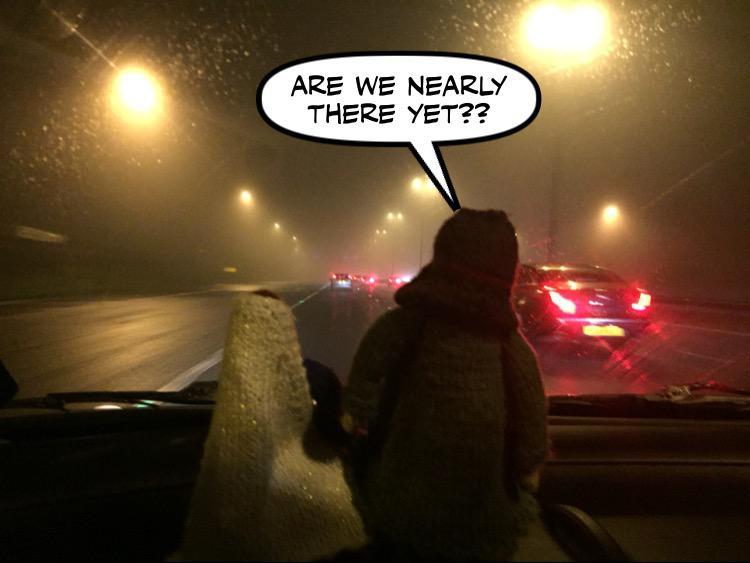 Today Mary and Joseph have been doing a lot of work. In the morning they were doing some marking with me, in the afternoon they went shopping and in the evening they were fixing a friend's computer! With days this busy I'm sure they're looking forwards to going back to school!

Guess what? Mary and Joseph were feeling a bit hungry this evening - shocking, I know. They cooked a very tasty steak dinner for themselves and saved a bit for me too. 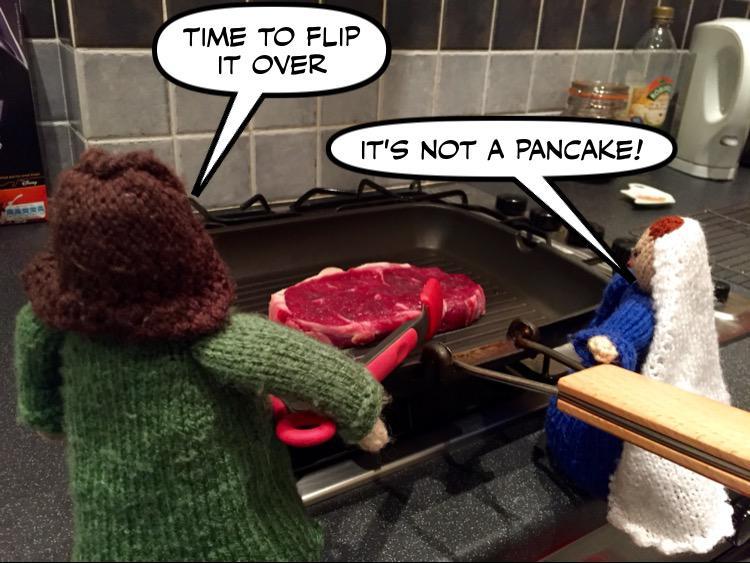 This afternoon, Mary and Joseph have been relaxing by playing a new Star Wars video game. Well... it was mainly just Mary as Joseph didn't really get a go.

Today is New Year's Eve and I'm sure many of you will have gone to a party or had some kind of celebration at home. Mary and Joseph were having an extra celebration as it was their friend's 40th birthday party too!

In the afternoon, they played a very exciting game called Room Escape. They were locked in a room full of puzzles, having to follow clues and solve codes to escape before the time ran out. 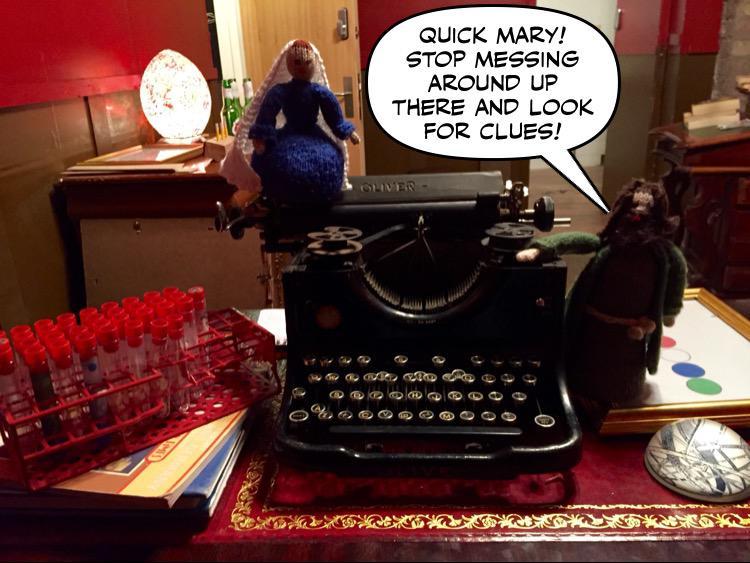 In the evening they went back to their favourite restaurant (where they went last Wednesday). To celebrate new year's eve, they decided to have a big banquet. To start, they had black pig gyozas (pork in crispy pastry) with a sticky plum jam, some minty lamb & broccoli skewers and soft shell crab tempura (crabs fried in a crispy batter). 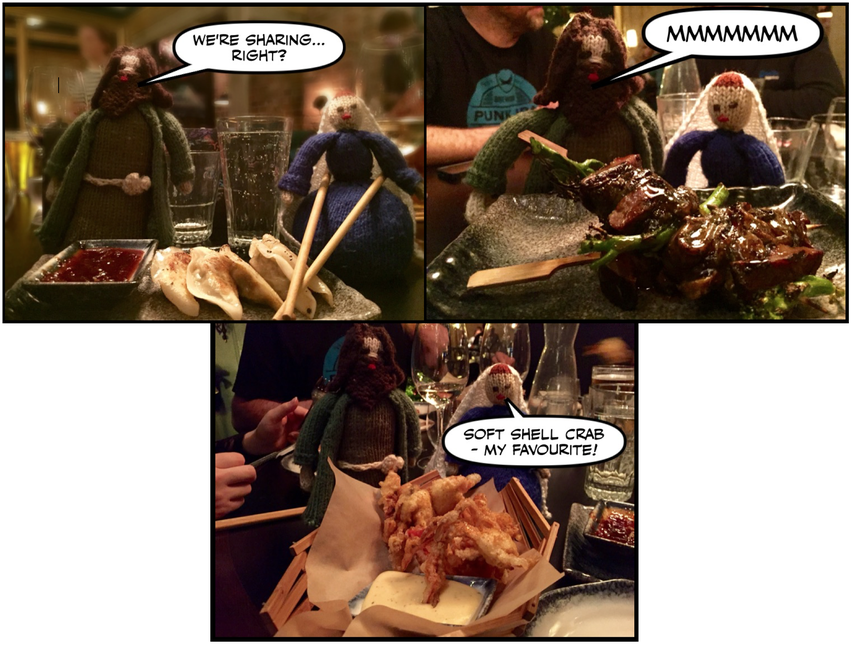 After that, they decided to have a bit more! This time, they had some sticky Korean wings, crispy belly pork & pickled pear in steamed buns and spicy sesame fries. Finally, for a sweet treat they had the same chocolate brownie spring rolls and coconut ice cream that they had the last time they went there. 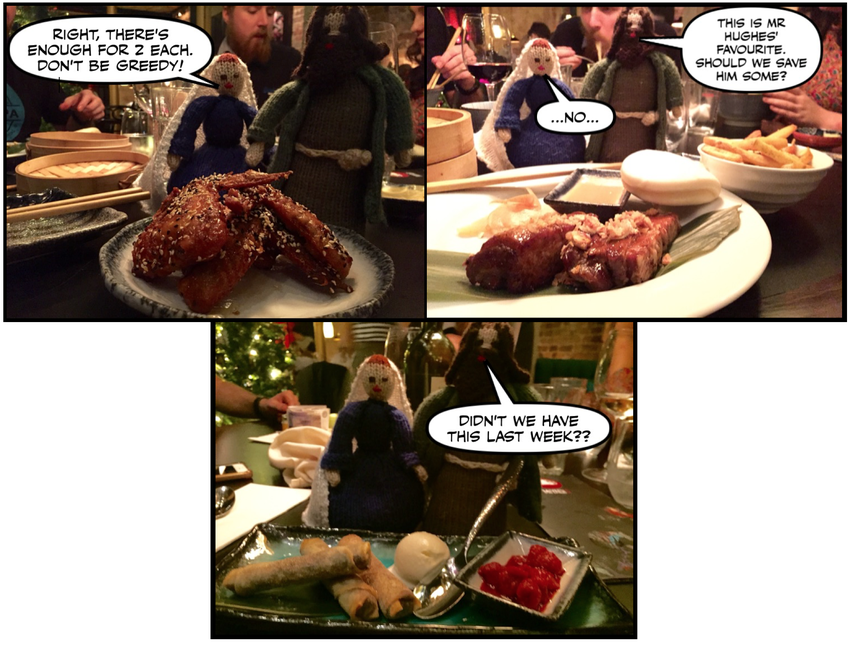 After such a big meal, Mary and Joseph decided to go home and see the new year in by watching the fireworks on TV. They were very tired by the time midnight came but it was worth the wait - the London fireworks looked fantastic! 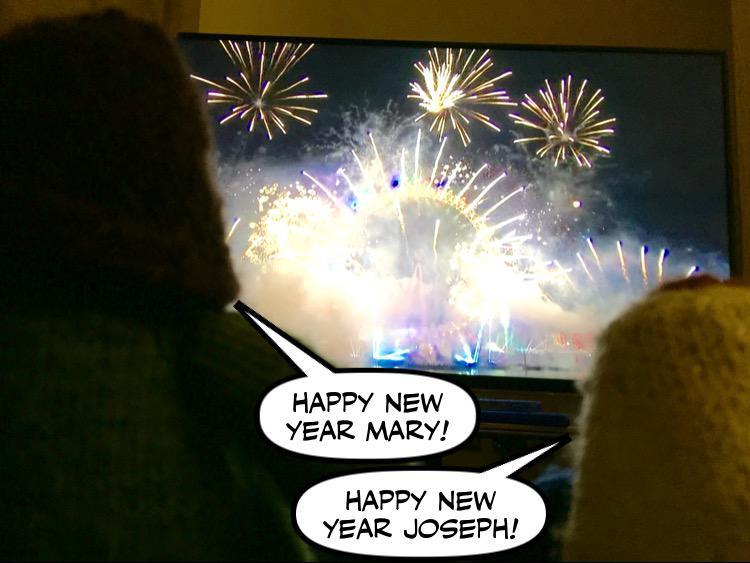 It was the first day of 2016 today - Happy New Year! After staying up past midnight last night, Mary and Joseph were both very tired today. The weather outside was horrible so they decided to spend a lazy day watching movies - what better way to start the new year. 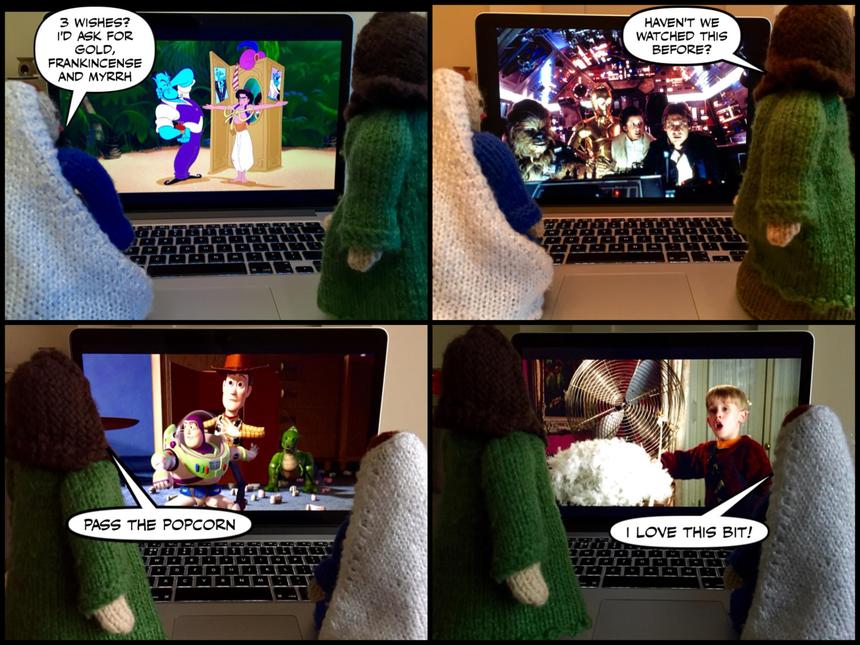 Today was cold, wet and rainy - the perfect conditions for a walk in the park with an ice cream. Mary and Joseph went to Calderstones Park this afternoon and while they were there, decided to try an ice cream from the new ice cream parlour. Joseph's favourite flavour is pistachio and Mary wanted cookie dough, so they got a scoop of each. Whilst they sat eating their ice cream, they had a funny feeling that they recognised someone... 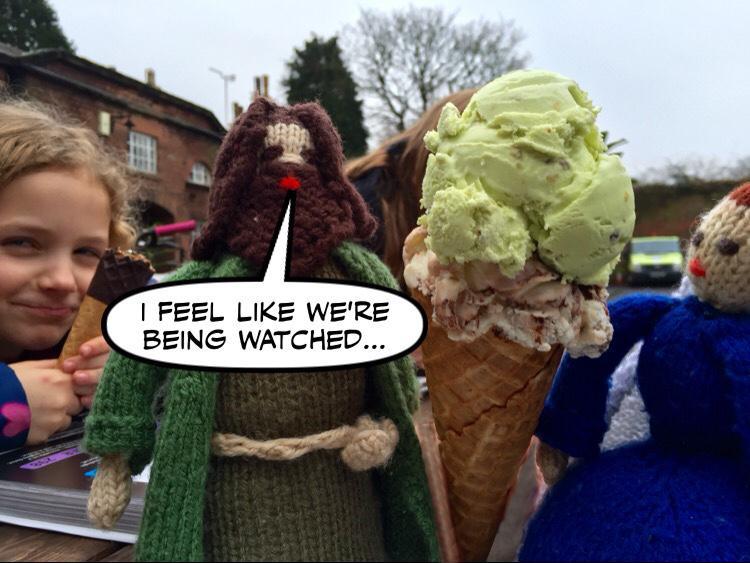 Well, what a horrible day to end the Christmas holidays with! Wind, rain and just too cold to go outside. Mary and Joseph have had a great couple of weeks off school. They've watched movies, gone to some interesting places and met some familiar faces too. Today they've been thinking about where they would like to go for their next holiday - anywhere hot and sunny... as long as there's good food there! 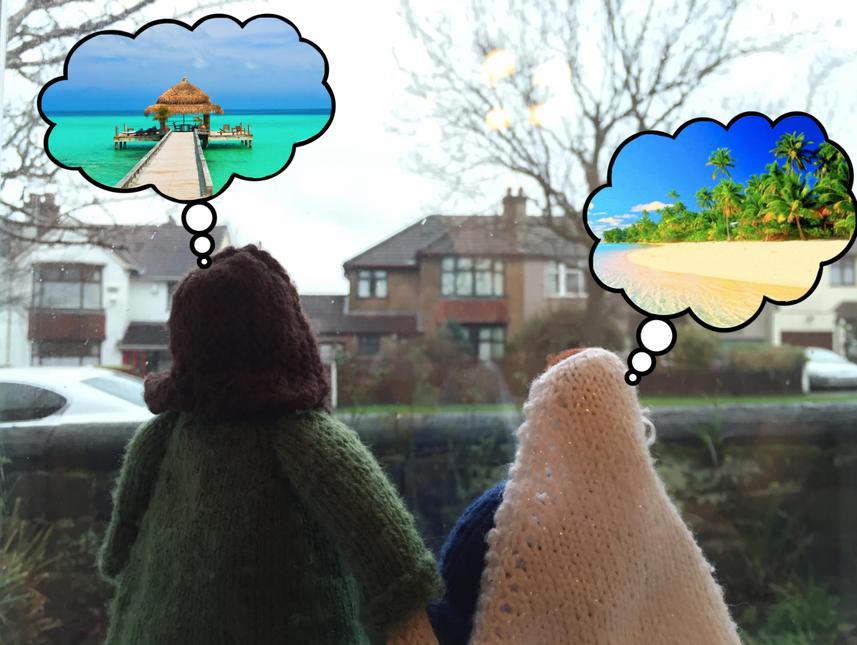